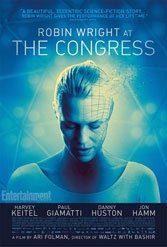 “You were always their slave,” Robin Wright’s agent Al (Harvey Keitel) tells his actress client early into Israeli director Ari Folman’s half-animated foray into the vicissitudes of movie and personal identity. Actress Robin Wright plays herself, formulated here as a faded Hollywood star. But we live in brave new times: a “Hermeneutic scan” is all it takes for a studio to absorb an actor’s cinematic past and digitally embroider it into future films. Sign on the dotted line and you’re no longer Robin Wright, actress, but a moveable feast of atomic matter in the keep of Faustian manipulators. In essence, once a slave, always a slave, but with no need to take up space in a trailer.

Panic-attack prone Robin Wright, the stilted sum of “lousy choices,” is horrified but tempted. She lives in a remodeled hanger on the edges of an LAX runway with two children, one going blind. What does she have to lose? Integrity? In Hollywood? Why should she resist what sleazy Miramount Pictures chief Jeff (Danny Huston) calls “the future, the answer”? Why not let “computer artists” freeze you in your prime? Why wax poetic about cinematographers in an age of scanners (and later “spiritual machines”)?

There are answers, some fancifully fascinating, others painfully overwrought. But more interesting than the answers — as is often the case with futuristic Sunset Boulevards — are the questions (the film is loosely based on a 1971 Stanislaw Lem novel). At best, this is clever if unsubtle meditation on the aging actress dilemma (and the fountain of youth myth), on animation as escape, and on the blurred lines between film, delusion, and hallucination. At worst (the loopy and lengthy animated segment), it’s proselytizing bore that uses trip-the-light-fantastic caricatures to construct a psychedelic utopia with little love for pharmaceuticals.

When she’s not animated (about a third of the running time), Wright bears an uncanny facial resemblance to cheek-strong Charlotte Rampling at about the same stage of her career, but it’s unlikely the fiery Rampling would have had the stomach for this.