The Confusions of Young Törless 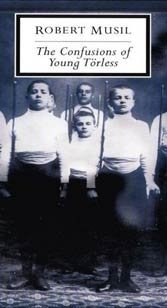 By Robert Musil, translated from the German by Shaun Whiteside

Though the anti-depressant age has made it trendy to associate teenage angst and its acronymic disorders with family “dysfunction” and constant over-stimulation, Austrian Robert Musil’s challenging 1906 novel undoes easy assumptions by focusing on four students at a military boarding school as they charge wantonly into the “raging storm” that is discontent and unapologetic sexual brutality.

As with Conrad’s “Heart of Darkness,” what matters here is the thinness of the line dividing high culture from arbitrary savagery. A storeroom where the boys go to hide out becomes a “forgotten closet of the Middle Ages” where behavior turns “dark and bloodthirsty.” Torture pierces the “illuminated surface” and tosses out the “wooden ruler of rationalism” — all in plain view of the stunned and ultimately laissez faire Törless (“Things happen; that’s wisdom in its entirety…”)

Military school sufferer Musil (1880-1942), who wrote the novel just as Freud’s speculations on sexuality and psychotherapy gained traction, gives Törless a kind of adolescent universality. He’s maimed by a primeval world neither words nor mathematical rationalism resolves. Though pre-destined to lead a safe life, what happens among the boarders gives Törless a glimpse of “dark, subterranean waters” in which “ailing refinement” carries the seeds of a deeper cultural sickness.

In Törless’s “furtive, forbidden, overheated” confusions lurk harbingers of a larger menace that would express itself in the coming world war, one that would not only decimate the Empire and open the door to Nazism, but also put Musil on the slow road to ruin.