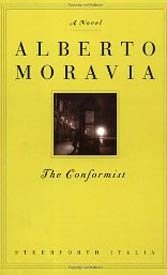 By Alberto Moravia, translated from the Italian by Angus Davisdon

oravia’s lucid prose, psychological intelligence, and ferocious clarity of purpose animate this subtle anti-Fascist indictment, which Bernardo Bertolucci would later transform into a seminal European film. The novel’s narrator, Maurizio Clerici, is the only child of a well-to-do family in early 1900s Rome. His mother is aloof and Libertine, his father an unhappy man on the brink of madness. A shy, vaguely effeminate child, ostracized Maurizio compensates for bullying with small but telling acts of violence. Lizards are exterminated. A cat is killed. To laconic Maurizio, violence is a personal accomplishment through which the will speaks. The aggression escalates when, at 13, he fends off the advances of a limousine driver – with a revolver.

The incident remains a driving force nearly two decades later, when Maurizio, now a 30-year-old mid-level Fascist secret service bureaucrat, is called upon to engineer an assassination of a “troublesome person” in Paris who also happens to be his former professor. He complies by rote, hoping that by serving the cause, by conforming loyally, he’ll finally shake his agonizing sense of moral aberrance and achieve “normality,” which he imagines as a “worthier destiny.” It’s not the applause of Fascist bosses he seeks but instead to escape “confusion and caprice” and feel “intimate, essential success,” which he sees as means to permanent acceptance within the mainstream.

In Moravia’s shrewd hands, Maurizio’s Paris “mission,” new wife Giulia in tow, is transformed into a layered portrait of prewar amorality and pyscho-sexual confusion. Maurizio must confront not only his old professor — who calls him “sick with austerity” — but also reckon with the ambiguous charms of his young wife Lina, for whom he suddenly lusts. “He was like a wire,” Moravia observes deftly of Maurizio, “simply a human wire through which energy flowed, ceaselessly, an electric current of terrifying energy whose refusal or acceptance did not depend on him. A wire like those high-tension cables on pylons bearing the notice: ‘Beware, Danger.'”

Impressionable Maurizio is a vital figure in the annals of 20th-century political literature because his deepest contradictions aren’t ideological. Carnal excitement confounds him into fury. He covets whores, lesbians, and men, as if to fulfill fascism’s normal abnormalities. He’s desperate to attach himself to whatever might take him in and like him. The parable suits not only the growth of Italian totalitarianism, which depended on mass complicity, but also the complications of “impure” sexual longing, which at the time still hid behind lock and key. By the time Marcello fathoms normality as “an empty form,” it’s too late.