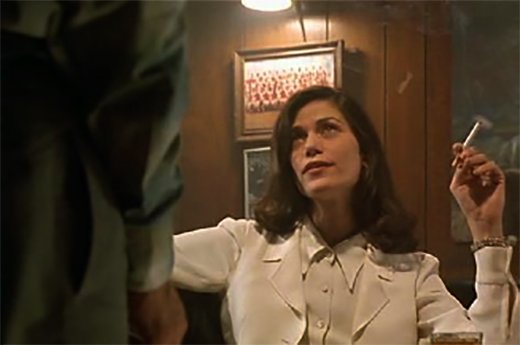 Linda Fiorentino as a cool con artist in "The Last Seduction," a classic noir of the 1990s.
A

few weeks ago, my acting teacher handed me a scene in which a married woman and her lover were scheming to find a way out of the wife’s marriage. The key was finding something that wouldn’t invalidate her prenup, which would leave her—me—penniless. In other words, an everyday situation. The second I read it, I knew I was headed for trouble. The role calls for a kind of serious confidence that I know I lack. Others might call it being “sexy,” a word that makes me cringe just writing it. I put on what turned out to be a wildly unimpressive performance after which my teacher asked me why the role was so visibly hard for me.

The question cut deep. She’d seen me do comedic scenes in which I had no problem confidently crying over a mishandled coffee order, or playing a high-strung maniac doing a bad version of the “worm.” I’d even played a character who hit (badly) on her new college roommate.

The role calls for a kind of serious confidence that I know I lack. Others might call it being “sexy,” a word that makes me cringe just writing it.

Within the confines of comedy, my confidence was solid. But what my teacher wanted, instead, was a topographical sense of overall confidence. Why did my generally reliable assuredness turn into a marsh when it came to a certain kind of drama?

I had no good reply. This experience did make me think hard about the nature of confidence, where it comes from and why we have it. At first, I saw confidence as a primordial remnant of self-exploration: a human mechanism telling us what we knew we were good at, what we could do without questioning ourselves.

For example, I know I can do comedy more easily than drama. As a result, the confidence I bring to a seductive scene in a comedic context is natural, just as insecurity surfaces when a similar scene has a dramatic shading. The naturalness shuts down.

We all experience this differently. You might become more aware of your fondness for the humanities when you take the SATs, knowing the test also calls for math, like the drama side in my comedy vs. drama equation. It’s the math that pushes you into the marsh.

Even animals show different levels of confidence. My dog Alfie boldly runs through fields to retrieve a tennis ball. But by the lake, he waits for ripples to return his beloved ball. It’s still all about chasing a ball, but his confidence falters in the face of water, so he stops. It’s a risk he won’t take no matter how much he wants the ball.

Confidence, then, is our unconscious telling us what we’re good at, and can accomplish, and what we’re weaker at, and therefore more likely to fail if we try.

But soon after reaching this conclusion, doubt crept in. And that doubt all but debunked the very point I was trying to make. Perhaps seen in a different light, confidence isn’t a reflection of our abilities, but a mental surrender.

When I perform comedy, for example, I am usually confident of achieving the right interpretation, and so I stop pondering other options. I just execute on cue. In drama, I constantly waver between the scene’s possible ways and means. I juggle options, think constantly, and in the end, produce a weak result.

I saw confidence as a primordial remnant of self-exploration: a human mechanism telling us what we knew we were good at, what we could do without questioning ourselves.

Is this how cult leaders operate? By (confidently) convincing themselves they’ve found the one true way and persuading others to join them? Confidence has endless angles and interpretations.

Let’s say you go to a vintage store and know immediately that the only reasonable purchase is a pair of jeans. Today is not the day to adopt a 1920s flapper look. With the jeans, you can walk out sure of your choice. But if instead, you go to a mall with its acres of racks, you’re likely to leave wondering if you didn’t miss the perfect something.

In the vintage store, you can put an end to the thinking. The choice is limited. You know what works. You can focus. In the mall, your mind wanders. Assuredness shrinks before so many choices. Nothing seems firm.

But what if there’s really no such thing as confidence, at least not in the way I’ve tried to define it so far? What if, because we’re humans and like to show off our ability to create existential crises, we based all our actions around patterns, which we repeat? We thrive when we’re confident; we fail when we’re not: no mystery, just a cycle of repeated actions.

Maybe saying you’re successful at something because of confidence is like the ancient Greeks saying that the wind died down because the Gods wanted it that way. Is it possible I was simply successful in one case and the wind simply died down in the other, without any need to decode things further?

Much as I’d like to conclude on a sure note, I’m afraid I can’t confidently assure you that any of this speculation is correct. My apologies. If it makes you feel any better, while writing this column I set aside any cult leader ambitions I might have had. The idea was just too dramatic.