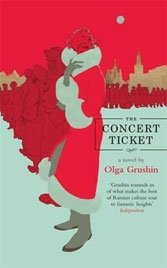 Grushin’s splendid first novel “The Dream Life of Sukhanov” focused on a late Soviet-era official who is slowly going mad. He drifts into a Moscow of the mind. Her second book is lovely but more subdued. Anna, Sergei and Alexander are mother, father and son in a pre-television Soviet-era city where day-to-day life is food, gossip, and radio broadcasts. Also in the apartment is Anna’s mother, a one-time dancer who dreams of pre-revolutionary times. It feels like the 1950s.

When Anna learns that famous composer Igor Selinsky, who defected to the West decades ago, will return to play a lone concert, she decides to get a ticket for her mother. The family joins in and the wait soon evolves into yearlong vigil before a kiosk that opens and shuts whimsically, the Communist version of the Latin mañana. Losing your place means giving up.

The line is Grushin’s metaphor. All yearn for a life-altering event. As seasons pass, Sergei lusts, Anna frets, Alexander turns delinquent, with eccentric characters drifting in and out of the narrative. All speculate about Selinksy’s motives, just when the concert will be, why Soviet authorities are allowing it. Tangents of nostalgia and doubt yield “layers of buried misunderstanding.”

But it is tuba-playing Sergei and Alexander who galvanize the story. At 47, Sergei’s self-esteem is in tatters. Does he still love his wife? Does he want the ticket for himself or his would-be lover Sophia? It’s not clear. Eager but indolent teenager Alexander imagines the ticket as a means to a new life, an escape hatch into dreams.

Moscow-born Grushin is incomparable in her portrayals of time-stands-still “Sovietness,” a state of place and of mind that create “a hushed pocket of timelessness.” Her narrative gift is extraordinary. Imbuing anticipation with hope gives life its contour, because life itself is both line and vigil. Waiting helps arrange priorities.

Fictional composer Selinsky is based loosely on Igor Stravinsky, who briefly returned to his native Russia in 1962. “An eighty-four-year old cousin of Stravinsky was unable to attend, as the tickets had sold out,” writes Grushin in a footnote. “Her number in the line was 5,001.” The stuff of books. (The U.S. edition is titled “The Line.”)