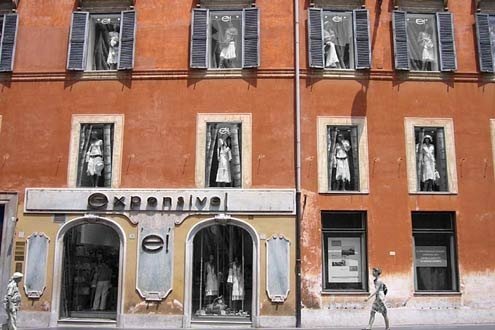 What other city gives you this?
H

ow often am I asked, “Why are you in Rome?” Let me count the ways: On Monday a new student in my English class asked me; when I am waitressing at Campo de’ Fiori American families catch the curious bug, main symptom being too many questions (Reader, if you ask your busy waitress her life story, please tip her). About a third of the Italians I meet manage to fit it in in under a minute. In fact, this morning I was woken up by some guy calling the wrong number, he was looking for Silvia. Upon finding out that I wasn’t Silvia and that I didn’t know Silvia, he asked me what I was doing in Rome.

So, about twenty times a week for the past three years I have been forced to ask myself, Why am I here? It’s like Chinese water torture for the psyche.

When I first arrived I had an answer. I’d come to Europe where studying at the university was cheaper. I’d chosen Rome because I spoke some Italian, I knew the city and had some friends, and because I’d gotten an au pair job in Trigoria.

A year ago when I stopped going to school I realized that it had never been the reason. But my not knowing the answer didn’t stop the question. Why am I here?

Strangers offered their two cents when they saw me at a loss and struggling for an answer. They’d say that I was escaping something. I felt lost. I’d fallen in love with a young Roman. Sometimes I’d just say, “Yeah, it’s that.” But it wasn’t.

Other times I’d go for intrigue by way of evasion. “I just had a lot of (pause for emphasis) stuff going on in America and needed to get away.” Then I’d give them that look, like You know what I mean, and let their imaginations take it from there.

At work with chatty Americans I’d pretend to be Roman on the nights that I didn’t feel up to self-examination. And with Romans it was often enough to say, “Mi piace Roma.” They’d chuckle or Humph and nod, satisfied.

After a few months of hiding from it, I decided that it wasn’t really a question to make light of. I went to Ralph Waldo Emerson for advice. For existentialists that’s the great dilemma of the modern era, right? Each man’s search for purpose. Why are we here?

Emerson said that a rose never asks why she is here. She never wonders if she is as pretty as the other roses or if she could be a better rose. She simply exists, and from her days as a seed to her death as leaves in the wind she is fulfilling her purpose. Emerson’s solution is that we are all here to perform one task, to breathe.

That worked for me, but I found it didn’t work for my public. They thought I was making fun of them. Why are you in Rome? To breathe.

No, that wouldn’t do either.

I kept looking. I searched deeper, I scrounged and scratched my brain. I wrote thesis papers on the subject late at night. I always felt like I was describing a tiny fraction of myself. The papers got longer and the idea got even farther away.

Then, a few months ago, I realized that I didn’t know why I was here, but that I understood it. All those months I had been looking to define an inexplicable sentiment, something written in my chromosomes. I felt profound and philosophical and beat. I didn’t need words, I had feelings.

A week later, however, I fell hard, from philosopher to sophist. You see, my roommate was, as usual, belting out a showtune in the shower, this time from “Joseph and the Amazing Technicolored Dreamcoat.” I yelled, “What’s with you and musicals?” She answered: “I dunno! They compel me!”

The word fell on me like an ACME anvil. To compel: to drive or urge forcefully or irresistibly. I knew the word but I’d been desensitized to it by too many trailers for “The Most Compelling Movie of (insert year here)!!!!!!” I hadn’t heard it in any form but the bland present participle in years.

I had almost convinced myself that I was wise, when in reality my profound chromosomes were really only the lack of the right word. I am just another person with an underwhelming vocabulary. I wonder what kind of emotions I could find in myself if I could just define and verbalize them precisely.

Why am I here? The city compels me absolutely.