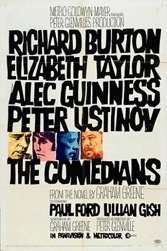 Martin Ritt’s superior handling John Le Carré’s “The Spy Who Came in from the Cold” in 1965 makes it all the sadder that Peter Glenville wasn’t able to duplicate the feat with Graham Greene “The Comedians” two years later, though Greene himself wrote the screenplay. The British novelist’s book was intended as an indictment of “Papa Doc” Duvalier’s Haitian regime and with it the capricious brutality of his henchmen, the Tonton Macoute (“Tonton make law; Tonton make order,” says a character). In the film, three men — Port-au-Prince hotel owner Brown (Richard Burton), lightweight wheeler-dealer Major Jones (Alex Guiness) and former “Vegetarian” platform presidential candidate Mr. Smith (Paul Ford) — converge on the capital, each one immediately accosted by the regime’s increasingly nasty realities.

Major Jones is arrested, his inside contact has been purged and murdered; Mr. Smith, who wants to invest, is escorted to ghost-town trumpeted as the country’s future capital; the infinitely jaded Brown, though disdainful of regime, is crippled by a love affair with the wife of the Uruguayan ambassador (a wooden Elizabeth Taylor).

Greene’s book infuriated Duvalier. The naiveté of its characters accentuated the hateful grimness around them. But the unfulfilling film version never unleashes similar drama. Burton scowls, Guinness wisecracks, Ford (and appropriately befuddled Lillian Gish as his wife) plays overmatched American. All three are in some way losers — comically “graced” for no other reason than being a sad improvement on what’s around them. The necessary moral grime doesn’t stick, demonstrating Greene’s limitations as a screenwriter. Burdened by caricature, hard words and their brooding mood fail to strike a chord on film.