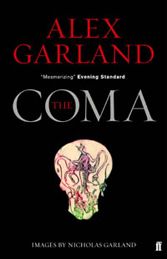 Garland has been weaving around since “The Beach.” It’s been a novel here (“The Tesseract”), a screenplay there (“28 Days Later”), and now this illustrated novella about memory loss and other forms of damage, physical and psychological (his father provides the woodcuts). Carl is beaten up by a gang when he tries to defend a woman on the London tube. Discharged from a hospital, his mind begins lapsing sideways and backwards.

Garland’s intent is to locate and dislocate concurrently, stripping Carl down to an approximation of a self — “glimpsing the ghost of coma future.” As he recedes into disbelief, Carl tries to establish if he’s a conscious narrator or an “it,” a suspended brain reading to itself. Garland plays with the dimmer switch until, breathless, the lights come back on.