The color of power 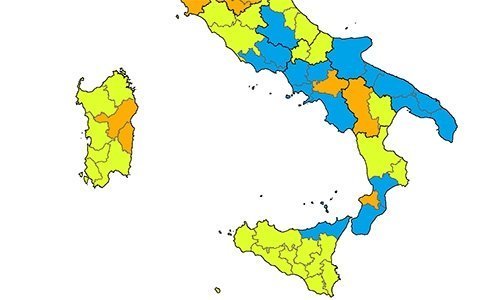 In 2013, Italy's south was mostly split between Berlusconi (blue) and the Five Star Movement (yellow). This time the landscape yellow only.
N

o veteran reader of entrails is required to make sense of the 2018 Italian general elections. Also not needed is the dictionary definition of populism. Voting maps tell much of the story, and stripped bare, go something like this.

The last time Italians voted, in February 2013, the potential of Democratic Party upstart Matteo Renzi, though not yet party secretary, was all the rage. He was the leader in waiting; the anointed thirty-something Tuscan ready to sweep away hoary cobwebs. On the right, as ever, stood Silvio Berlusconi, and with him the increasingly maligned Northern League, now marred by its association with tainted founder Umberto Bossi. Fresher sorcery came from comedian Beppe Grillo’s internet-driven chunk of havoc, otherwise known as the Five Star Movement (M5S).

With the Northern League stuck on thin ice of Bossi’s making, much of 2013’s northern votes drifted toward the Democrats, and its weapon in waiting Renzi. As always, Berlusconi scored in the south and Sicily, which now as always swears by heroes, pariahs, messiahs and Hail Mary’s. But it was Grillo’s “Mad as Hell” legions that dominated the headlines. They poached several northern provinces, including Genoa-born Grillo’s Liguria, while picking up rogue wins in Berlusconi’s fortress south. The 2015 vote totals saw the Democrats, then led by warhorse Pier-Luigi Bersani, and Berlusconi’s gang, in a near 30 percent dead-heat, with Bersani ahead by a fraction. Just behind, at a remarkably high 25 percent, was Grillo’s bumper car army.

Flash forward five years, time enough for Renzi to divide, conquer, rule, disappoint and ultimately flame out, pushing too hard for swift reforms (Italy resists swiftness) and eventually leaving a shockingly fractured and demoralized party in his wake. For his part, Berlusconi did what old men do best, get older; he is now 81.

Critically, however, the seemingly dead Northern League got itself a new, young and ferociously outspoken leader, Matteo Salvini, who beginning in 2014 revived the party’s xenophobic grass roots and amplified its allergies to all things European. He transmitted firebrand protectionism and warned of a “migrant invasion” with Trump-style vigor. Suddenly, Salvini was the best new bully on the block, and whenever Renzi coughed — which he did often after his 2014-15 honeymoon he did with increasing frequency — Salvini spoke of cancer. Within two years, the League was cool again, cooler even than the Five Star Movement, whose goal of broadening its northern inroads was stopped cold.

So Grilli’s team came up with a masterstroke countermeasure. It chose a southerner, Luigi Di Maio, born near Naples, as Grillo’s successor. An MS5 devotee hardly out of his 20s, Di Maio was everything the loudmouthed, north-to-the-core Grillo was not: handsome, smooth, sleek, and capable of alternating between cajoling and confrontation. The party’s aim was clear: yank as much of the impressionable south from the aging Berlusconi. And guess what? It worked.

Di Maio’s media skills changed the M5S image from that of a ramshackle force to one apparently if not actually interested in governing and governance. His views were fiercely conservative but his personality entirely accessible.

The provinces won by the Democratic Party in 2013 switched almost effortlessly to the face-lifted League, while the southlands on which Berlusconi once depended were his no more, in part Di Maio’s doing. M5S took home 32.6 percent (up from 25, thanks to the south), the Northern League won 17.4 (up from 4.3), while the Renzi Democrats limped to an 18.7 showing (down massively from 27), with Renzi himself resigning as party chief as a result of the wrecking rout.

In essence, the north, long a leftist stomping ground, lost all faith in that formula, flocking instead to hardcore Salvini. The south, long at home with mogul Berlusconi, realized its patriarch was done.

Go tell it on the mountain, about populism, racism, and hateful disdain for the EU. But after you’re done pause to look at the map and study the shifts. There, you’ll see (as you could two years ago in the United States) how disenchantment travels, and fast. Smart is the party that knows not only to seize the moment, but how to find the right preachers, and preachers the right hymns.