The Color of Money 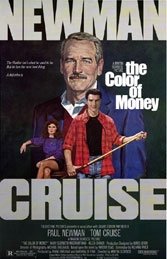 Director Martin Scorsese stirs several hackneyed ingredients into a story about a brilliant but amoral cue pro who latches on to an up-and-coming newcomer, weans his talent, schools him in life’s crookedness, only to see child become father to the man.

What galvanizes an otherwise predictable story line is Paul Newman. His “Fast” Eddie Felson catches glimmers of his younger self in the over-swaggering Vince (Tom Cruise). For a time, profit soothers ruffled feathers. Until Fast Eddie can’t live with his cocky Frankenstein, dumps him, brushes off the rust, and decided to return to business as usual. Or try. But now he has only his creation left to beat, Vincent, who’s become a hustler in his own right.

Watching Newman is all the pleasure here, particularly during the movie’s Atlantic City climax. He’s at once con man aloof and vulnerable; Willie Lowman made vain. Cruise in turn feeds off Newman, morphing from puppy dog to terrier. “I’m not your daddy, I’m not your boyfriend, so don’t be playing games with me,” Eddie tells Vincent early on. Not so fast. There’s lots of daddy and plenty of games.

Vincent’s girlfriend Carmen (Mary Elizabeth Mastrantonio), while a fine actress, is little more than a dollop of brio in a vat of testosterone. All twilight cool, Newman won a best actor Oscar.