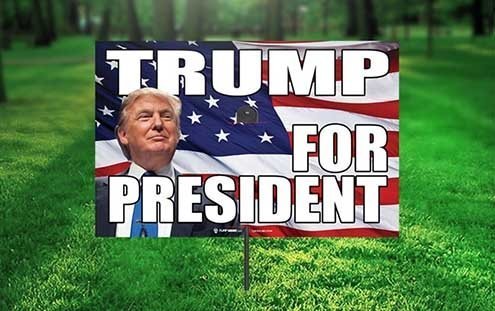 Many reporters from the coasts filed to see Donald Trump coming because they'd simply never had any experience outside blue state big cities.
O

ne of the various byproducts of the 2016 presidential campaign is a kind of news report that follows this pattern:

A member of the coastal media elite or a personality — usually male — visits what he calls “flyover country,” that vast and hard-to-read American acreage between New York and LA. The intrepid writer still wonders why he didn’t see Donald Trump’s victory coming and why the country is so divided. With the goal of meeting and understanding Trump voters (the only one he knows is the fourth cousin of his mother’s third husband’s ex wife), he goes to a small Midwest city and visits local institutions such as the Mom ‘n Pop Coffee Shop, an evangelical church or a county fair. There he talks to one of two kinds of stereotypes, or both. The first is a bitter guy in a plaid shirt whose blue-collar job was outsourced and whose truck has a gun rack. The second is a kind of anti-stereotype who upends generalizations. He’s a pro-abortion, transgender religious fundamentalist who likes deer hunting. There’s always a self-deprecatory “cute” episode in which the metro-sexual author tries and fails to resemble the Marlboro man. Scary equipment like a gun or tractor is usually involved.

Safely back in his blue-state, the writer thanks his new red-state friends for his epiphany: he now realizes there’s more that unites than divides us. After all, we all love our children. As for the rest, well, it’s complicated.

These dispatches form part of what I call the “colonial report,” because if a similar perspective were applied to developing countries, it would carry just that kind of burdened colonial tone.

I grew up in Rockford, Illinois, a colonial reporter’s dream city. Rockford voted for Trump. Its industry has decamped or died and its population is declining faster than any other city in the state. Racial tension lingers from a bitter 1990s fight over school desegregation.

It is my Rockford past that leads me to make the following observations on Trump-country reporting, starting with the “flyover country” concept, which before a word is written gives the author implied superiority. He’s the wise interloper in an alien nation.

Point 1:I got a taste of this when I moved east. New Yorkers found my “Midwestern accent” funny and assumed my father was a farmer. Was I from Iowa, Illinois or Ohio? Did it even matter? Weren’t those states all the same?

Point 2: The anti- “elite coast” feeling long predates the 2016 election. In 1968 my sister’s college counselor accused her of “wanting to go out East and be stuck up” when she applied to college in Boston. In the early 1980s, members of the deeply conservative Rockford Institute fired early shots in the culture wars from my family’s living room couch.

Dislike of mainstream media also has deep roots. Richard Nixon was on to it in the 1950s as vice president. In the 1970s, my own father and many we knew admired economist Reed Irvine. Irvine’s organization, Accuracy in Media, was an early watchdog of American media, calling out its liberal bias and in many respects paving the way for Fox News.

Had colonial report authors been paying closer attention to the “flyover country” they visited as an afterthought, they might well have seen Trump coming. They also might have understood his success as a vindication of long-held suspicions.

Point 3: Once upon a time, local and regional reporting was robust. Colonial report-style dispatches were unnecessary. When I was growing up, Rockford had both a morning and an evening paper. Both belonged to the Gannett chain, which controlled hundreds of similar small and mid-sized local newspapers across the U.S. (and later created USA Today).

In the 1970s, when Gannett brought a new publisher from upstate New York to run both papers, the city’s conservative establishment viewed him, and his Eastern liberal roots, with suspicion. But it reserved judgment. His children attended Rockford schools. He socialized with the town’s business leaders and got to know the state’s local and federal representatives. Although the publisher never lost his “liberal bias,” he understood the town and respected its concerns and values.

The newspapers’ reporters also lived in town. They shared lives with the people they wrote about through school, church and sports. This gave them insight. In addition, strong social incentives meant reporters avoided so-called fake news by picking up on both sides of an argument and getting the facts right.

When letters to the editor were the only forum for public opinion, local papers kept hot tempers from starting fires. Editorial staff weeded out weirdoes and serial ranters. Unlike anonymous social media, letter writers couldn’t play hit and run. Newspaper readers were your fellow church members, colleagues and golf buddies. They knew you and held you to account.

Papers like those in Rockford belonged to a broader media-career ecosystem. An aspiring Bob Woodward or Carl Bernstein might work his way up from Rockford to a large metropolitan daily. Or big-paper journalists might move to a small town to raise a family or publish or edit a local or regional paper.

This ecosystem kept media — and political — power from focusing on the coasts. For many journalists, flyover country was not a foreign land but a place they’d lived in and where they had friends.

The colonial report aims to explain what happened in the new “hinterlands.” Sadly it often just perpetuates the causes.