The Collected Stories of Leonard Michaels 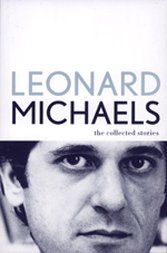 Reading Leonard Michaels’ first collection of stories “Going Places” (1969) is — to borrow an image from the poet Yehuda Amichai — like banging one’s head against a door and screaming, “My head, my head!” With razor precision, Michaels scouts out the psychological underbelly of late ’60s New York. These early stories have a tough sexual edge and a nervousness that is never resolved, but only adds a sense of desperate urgency. Every dialogue is fragmented into near incomprehensibility as the situation comedy spins out of control, despite the fact that not much actually happens. An aged Talmud scholar slips on the ice (“What’s-a-matta, fuckhead, too much vino?” quips a police officer); a rabbi’s daughter is raped by a Turkish student, then hangs herself; Phillip escapes his girlfriend’s father’s ire by fleeing naked into the subway; discovering he has gonorrhea, the narrator vomits in his own shoe (“I yelled; she ran in; I pointed. Why is it green?”) then hops the downtown express at 3 a.m.

It’s tempting to say that, after “Going Places,” it’s smooth sailing. But Michaels’ second collection, “I Would Have Saved Them If I Could” (1975), is no less informed by a kind of gun-to-the-temple psychoanalysis. The stories get longer and less compressed; the narrative style smoother, less frantic. Sex is always in the foreground and explicit (and often hilarious), though never quite spirals into literary voyeurism. The sentences sometimes reach 20 words or more.

The only section of the book that seems onerous is “Journal,” a 50-page performance that is, despite a few deft passages, what it advertises. Readers who make it to the final Nachman stories — left uncollected at the author’s death in 2003 — will find a wise, mature storyteller telling the best tales of his career.