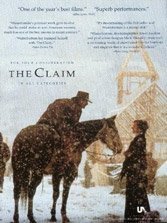 Micheal Winterbottom’s moody slice of frontier impressionism is less about the West than set in the West, a vision of a place that under different circumstances might be the snowy Scottish highlands or any Godforsaken outpost with a town, in this case a fiefdom portentously called “Kingdom Come.”

Witterbottom’s highlands are the Sierra Nevada of the late 19th-century, a landscape lorded over by one Mr. Daniel Dillon (Peter Mullan), who papers over the many skeletons in his closet by living in a haunting Victorian mansion attended to mistresses and “subjects.” It is neither heaven nor hope, but a kind of hedonistic, ice-bound purgatory.

From the mountain snow emerges an ailing Polish woman, Elena (Nastassja Kinski), and her daughter Hope (Sarah Polley), and it’s clear from the start that they’re dooming emissaries from Mr. Dillion’s checkered past. Their appearance switches the focus to railroad entrepreneur Donald Dalglish (Wes Bentley), whose brash plan for a rail line that will slash through “Kingdom Come” suggests that Mr. Dillon’s patriarchal time may have come nigh.

Winterbottom has attempted to relocate the Thomas Hardy’s “Mayor of Casterbridge” into gold rush and brothel country, hoping to emerge with characters suitable to such a transplant. But character is snowed in, literally. The film becomes an exercise in atmosphere and the dread that deep chill inspires. The cold, which greed can’t neither deflect nor keep at bay (sexuality is no more effective), gives this moody story its visual badge of honor. In “Kingdom Come,” remorse and hope are ignored by the landscape, and all that really seems to endure is the sound of the wind.