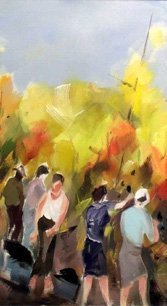 very year as the vendemmia winds to a close and tired but happy vineyard workers celebrate the close of the crush, I get the same questions: “How was the harvest?” and “Is this year’s vintage going to be good?”

Knowing that most wouldn’t appreciate my “I don’t own a crystal ball” humor, I smile wryly and politely deflect the questions with a self-preserving, “We’ll have to wait and see.”

Why do I resort to noncommittal vagaries? Not for lack of opinions certainly. I’m just not an expert about this delicate stage in a wine’s development. In neurosurgery, you turn to specialists for an informed prognosis. My own take on a harvest’s prospects is about as informed as a neighborhood bookie before a Sunday kick-off. I do my homework and have my hunches, but I’m not not the person to lean on for tips.

I’m not an agronomist. I’d enjoy nothing more than spending my days tromping through endless rows of Cabernet Sauvignon and Sangiovese, but that place belongs instead to wine-making’s equivalent of a grape coach. It takes a master’s training and skill to nurse vines back to life after they wake from winter slumber. Late winter bud-break is when nascent grapes are most vulnerable to frost.

As the season progresses, vines grow stronger. The agronomist fastidiously checks and rechecks them. By fruit set, when fertilized grapevine flowers evolve into tiny green grape berries, weather becomes a central concern. It’s up to the agronomist to gradually decide which bunches, grappoli, might potentially represent the stuff of legend. His tutelage is severe but necessary. The grapes left standing have made it into the three-stage finals: Vendanges en vert (the green harvest), véraison (the ripening) and the harvest, the vendemmia. Grapes worth their stuff are hand-picked for bigger and better things.

And as our agronomist bids goodbye to his bunches, he tips his hat, passing off the last grappoli to the vineyards’ winemaker, the enologist. He hopes he’s started them down the line to fame.

A wine-to-be is to the enologist what a rookie is to sports. Grape “trainees” are pressed with hopes they’ll become future champions. Consulting his DOC or DOCG playbook, the enologist begins tinkering with his line-up to ensure each grape is up to snuff. Putting the ruby-red recruits through their paces can take months, even years. The experienced enologist is in full charge each step of the way. He decides whether to use barrique or botte (sometimes both). The point is to get the most from each grappolo.

Which grapes become celebrities depends on a variety of factors, including where the grapes are grown, the condition of the vines, the weather throughout the growing season, the timing of the grape harvest, the process in the cantina, and even the style and length of aging and bottle fining, or filtering. When egronomists and enologists talk, it’s wise to listen.

What are insiders saying about Italy’s 2008 vendemmia?

Italy outpaced France in grape production, making it an abundant year. Fairly cold winter temperatures broke the vine’s dormancy later than usual, and summer temperatures hovered around 32˚ Celsius, on the mild side. With no substantial heat waves between June and August, the grapes were less stressed, allowing for more uniform maturity. Lower temperatures also meant longer maturing time and wineries began harvesting later than usual in some key areas.

Unfortunately, bad weather in the Italian northwest, including Lombardy and Piedmont, did those regions no favors. There’s a chance Lombardy and Piedmont won’t measure up to last year. If you’re looking for a winner in 2008, you may want consider focusing on Italy’s center and south.