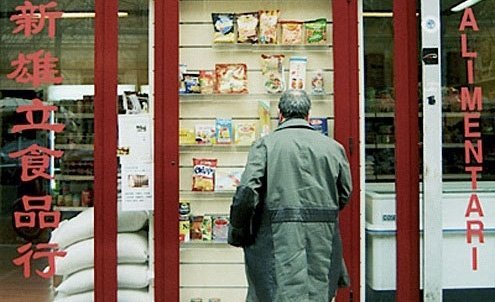 Rome city authorities have cracked down on Chinese storefronts, fearing the creation of an official ethnic subculture in the capital.
A

casual observer would be hard-pressed to distinguish between Snack Shop and any other corner bar in Rome. Espresso and spirits are served up front; video poker is played in back. And yet, Snack Shop enjoys a unique status among Roman watering holes.

Situated between Rome’s Termini train station and Piazza Vittorio Emanuele, Snack Shop is the only business on its block without a sign transliterated into brush-stroked Chinese characters.

Xiao isn’t taking about blackmail money. He refers instead to a recently adopted law aimed at preventing bars, bakeries, and tobacco shops from yielding to local ethnic preferences.

As of late, businesses like Snack Shop have become relics in Esquilino, a dilapidated working class district where thousands of Chinese have opened up shop, turning the area into a de-facto Chinatown.

Esquilino’s transformation, while gradual, has caught the attention of city officials who are trying to roll back Rome’s Chinatown before it can consolidate. Regulations limiting the size of Chinese characters in relation to lettered signs are being enforced, as are new laws “protecting” businesses like Snack Shop from crossing coffee beverages off its menu in favor of green tea.

The number of stores inspected in the Esquilino, meanwhile, jumped to 230 in 2003, a 340 percent increase from the 48 stores inspected the year before. The scrutiny, city officials say, is part of a campaign to “integrate” Rome’s estimated 6,000 Chinese and prevent a potential precedent for ethnic quarters in a city that prides itself on local custom.

“This is Rome, not London or New York,” said Maria Grazia Arditto, spokesperson for the department in charge of regulating city commerce. The measures, she said, do not single out Rome’s Chinese but address “any ethnic group that tries to take over a neighborhood in Rome’s historic center. You cannot have a Chinatown in Rome.”

The resistance is exceptional coming from a city that regards itself as a racially sensitive alternative to the nativist impulses of northern Italy, where the anti-immigration Northern League holds sway. As recently as April, the city council added to its ranks an advisory board of representatives elected by the capital’s immigrant residents.

Silvio Di Francia, leader of the council’s center-left majority, hailed the addition as a “positive cultural shock,” according to Rome’s La Repubblica. “For centuries, these seats have represented the Roman identity. Today they tell of a new city, a multiethnic one,” he proclaimed.

The wrangling over Esquilino, however, has exposed fault lines below the city’s multicultural surface.

“So much for free enterprise. Suddenly it’s tradition that matters most,” said Daniele Wong, an Italian-born activist and former Esquilino shop owner, referring to the law affecting businesses like Snack Shop. According to that law, which the city began enforcing last year, businesses in Esquilino with more than a 15-year history are considered “traditional” and are thereby prohibited from altering their nature for two years after a change in ownership takes place. “But let’s be clear. Are we protecting Roman traditions, Italian traditions, or just any tradition that isn’t Chinese?” Wong said.

Wong also disputes the city’s claim that it is not targeting the Chinese, noting that the increased inspections and changes in law only apply to Esquilino because that’s where the city’s Chinese are.

Esquilino’s Italian residents, many of whom applaud the recent measures, argue that the cultural insensitivity goes both ways. Dima Capozzio, president of the Esquilino block association, recalls the process that led up to the transformation. “Up until now, it’s been completely out of control,” she said, describing the decade-long boom during which most of the neighborhood’s Italian landowners liquidated their storefronts, block by block, transforming Esquilino into a commercial center for Chinese imports, ranging from nylon pajamas to ginseng. As a result, she said, “I cannot even shop for mortadella without taking the bus.”

The discontent among the neighborhood’s Italians could cut deeper than shopping inconveniences. Laura Casanelli, a Rome-based researcher with the Immigration Observatory of Prato, Italy’s largest center for research on Chinese immigration, believes Italians tend to mistrust the Chinese for their differences in lifestyle.

“They see young Chinese working all the time and never going to the discoteca. To an Italian it seems illegal, if not inhuman,” she said.

Xiao, who immigrated with his mother to Rome from the port city of Wenzhou, said he is more accustomed to the frenetic pace of Esquilino’s garment district, where his mother worked for 14 years before investing in the Snack Shop. Lounging behind a café table, Xiao surveyed the empty chairs around him, adding: “Profits are fine, but this business — it isn’t very demanding.”

Among the more widespread stereotypes, Casanelli says, is the notion that Chinese crime organizations, or triads, control Esquilino’s commerce and its immigrant workforce. That perception arises from the Italian media’s tendency to stereotype the Chinese in stories ranging from the liberally reported — the perennial kung-fu battle over street territory — to the nonsensical: “Elderly man dies in Rome during Chinese massage,” read an April headline in La Repubblica.

But Casanelli said suspicions are also fed by the selectivity apparent in Chinese immigration patterns. Ninety percent of Italy’s estimated 60,000 Chinese immigrants come from the eastern province of Zhejiang and its port city, Wenzhou, according to the Catholic relief agency Caritas. Once in Italy, immigrants tend to concentrate their numbers rather than disperse, settling exclusively in Milan, Prato or Rome.

At the root of these patterns, Casanelli says, lie systemic problems with the agencies, both in China and Italy, in charge of relocating the emigrants. “The chain of migration consists of groups who came here in the 1980s and 90s and set up networks that favor friends and friends of friends.” While many of these agencies lack transparency and practice favoritism, Casanelli says their modus operandi is a reflection of insider business practices she’s observed in China rather than widespread criminality.

“The idea of a Chinese triad operating in Italy is a pure myth,” asserted Francesco de Cicco, who heads the foreign crime department of the Central Operations Service (SCO), a police branch. But authorities have seen recent increases in crimes with a “mafia trademark” such as extortion, illegal immigration and money laundering, he said. “These kinds of activity aren’t nearly as alarming as some of the drug trade and kidnappings we’ve seen from other (immigrant) groups, but they’re significant,” he said.

Casanelli, meanwhile, senses a double standard lurking behind all the anxiety: “People tend to jump to conclusions based on their own experiences.”