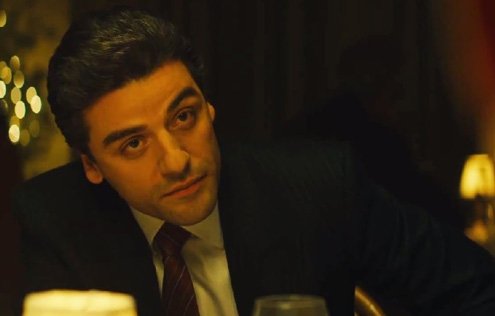 ew Jersey-born J.C. Chandor is most at home with desperate men. He showed it with Kevin Spacey as Sam Rogers in “Margin Call,” with Robert Redford as a mariner adrift in “All is Lost” and now with Guatemala-born Oscar Isaac as Abel Morales in “A Most Dangerous Year.”

Not bad men. Not cruel men. Cornered men. They’re flawed but immovably moral, ruthlessly determined but seemingly on the brink of sure derailment. In narrative terms, they’re usually picked up at the moment when they’ve reached, or are about to reach, some personal point of no return.

“A Most Violent Year” is a portrait of New Yorker Morales, an opportunistic but upright Latino-American heating oil salesman and company owner in 1981, when the city’s crime rate was sky high. He’s built his upstart company from scratch, with help from his tough and wily accountant wife Anna (Jessica Chastain), “a Brooklyn corner store gangster’s daughter.” His success has allowed him to move ambitious Anna and his two daughters into an affluent suburban property. All he needs to do now to get a leg up on his fierce competitors is seal a deal for a tract of land with a fuel oil terminal along the Jersey side of the Hudson (“I like to own the things I use,” he tells the careful Orthodox Jews who own the property).

But then, suddenly, fuel trucks are hijacked; first drivers, then salesmen are assaulted. Who’s behind the bullying campaign isn’t clear. At the same time, an ambitious local prosecutor (David Oyelowo) is preparing to hit Morales’s company with price-fixing and corruption charges. A downward spiral forms. A goon turns up at Morales’ house. The local teamsters boss wants to arm the drivers with handguns.

This accretion of bad tidings might be called the Chandor Chokehold, accelerants toward a tipping point designed to push a man who’s so far resisted the worst — “I’ve worked all my life not to be a gangster…” — past restraint. That edge seems nearer still when besieged Morales is denied the remainder of the loan he needs to purchase the vital river property. All at once, the driven capitalist with a good heart is forced — like Sam Rogers and the mariner — to do what’s necessary to survive.

But what differentiates Chandor’s stories from so many others in a similar vein is what follows the tipping point. The response is usually not loud, vengeful or noisy. Instead, Chandor drives his protagonists closer to their ego-driven essence. They become prideful, resourceful, and intense. They refuse to lose. “I’ve always been a lot more afraid of failure than of anything else,” says Morales, and the fear directs him.

Hollywood male desperation that almost invariably yields physical violence in Chandor’s hands instead hones confidence and redoubles pride. The cool Morales, on the brink, will only call the situation “a bit of a rough patch.”

The Chandor male caste system responds to rough patches not as calls to action, gunplay, or blunt confrontation but as challenges to dig deeper into an existing, cerebral sensibility. What got you to where you are is what you stick with. Cool-as-ice Morales grows cooler still. There is no brutish violence, no explosively gratuitous sex. The turmoil is internal.

“Mr. Fucking American Dream,” as wife Anna calls him, trying to bait the inner brute, is governed by a set of proto-underworld ethics (loyalty, family, personal charm) that are at the do-what-it-takes core of Chandor’s dramatic vision of American capitalism. “I have always taken the path that is the most right,” Morales tells prosecutor Lawrence. Not absolutely right, mind you. Not unimpeachable honest. Just “most right.” Chandor’s loyalty to his own vision of male sense and sensibility gives his stories moral stylishness and bracing candor. These American Dreams that come at a price.