The Case of Comrade Tulayev 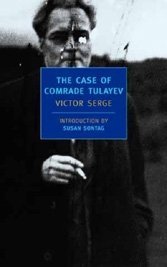 By Victor Serge, Translated from the Russian by William R. Trask

More personal and political, this time during Stalin’s purges. Serge, Trotskyist, anarchist, theorist and novelist, is that rare thing; a forgotten literary cult figure who really does not deserve to be forgotten. Exiled and miraculously surviving, Serge for many years was a Cold War personality that all wished would go away. Serge’s works exposed the folly and failure of the Bolshevik revolution in ways so individual that neither side could take him up comfortably.

Comrade Tulayev, is the tale of the random and casual murder of a member of the Central Committee. Like “Crime and Punishment,” we know whodunit from the start and we follow the event’s fallout. In this case, the crime unleashes pressures building up around Stalin (depicted as The Chief) as cadres, old Bolsheviks, and rapacious jurists scramble to use the event to settle old scores and circumvent new ones.

Serge gives us intimate portraits of those who pay for the crime with their lives and exile. Innocent of the crime itself, they are guilty of arrogance, being ingenuous, licentious, or just being too old and tired to resist the firestorm of accusation and sheer meanness dominating Stalin’s social experiment.

Full of telling details, the book is like all of 19th-century Russian literature — the nutty individuals, vexed social and political questions, absurd fate — rolled together and shot up with some sort of Soviet-devised amphetamine. Tired of etiolated products of America’s writing industry? Take a dose of this.