The case for cork 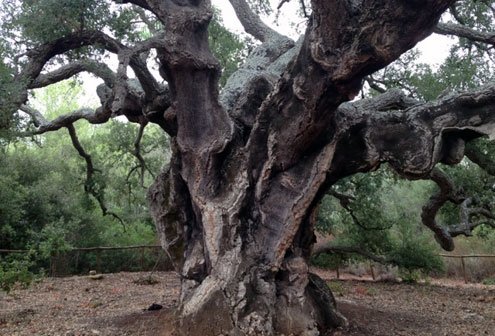 Cork trees can live up to 300 years. Photos by Eleanor Shannon.
P

opping the cork is a large part of the ritual of drinking wine, but nowadays the bottle stopper isn’t always cork. It might be plastic, glass or screw top. Which is best? Which is the most environmentally sustainable?

Winemaker Gianfranco Daino helped answer some of my questions when he took me to see cork oaks (Quercus suber) in the southeast Sicily’s sprawling Santo Pietro forest near the town of Acate.

According to Daino, the forests of Santo Pietro and nearby Niscemi once formed part of a massive 30,000-hectare (74,000-acre) parcel officially deeded to the people of southeastern Sicily by Federick II, who was Holy Roman Emperor at the beginning of the 13th century and a fascinating figure in his own right.

Raised in Palermo, a major Mediterranean cultural center at the time, Frederick (1194-1250) learned Latin, Greek, Arabic, French, German and Sicilian. Intrigued by mathematics, he traveled to Pisa to meet numbers wizard Fibonacci and later helped introduce the Hindu-Arabic numeral system into Europe. His nemesis was the pope, who excommunicated him four times over his refusal to fight the Muslims in Jerusalem.

Entering Frederick’s forest felt like stepping backward in time as we left the vast open tracts of dry, desert like hills and drove under a magical canopy of leafy branches. Daino, whose vineyard is at the edge of the forest, pointed out tiny blooming flowers, numerous herbs, and other unusual plants. This ancient and abundant undergrowth helps give his grapes rich flavors.

The largest cork oak in San Pietro is nearly two meters in diameter and looks like Tolkien’s “Treebeard,” a gnarly, ancient giant whose enormous branches seemed to defy gravity.

Cork oaks must be planted at least 25 years before they can be harvested but typically live 250 to 300 years. Harvesting the cork entails stripping the bark by hand every nine-to-12 years. The tree then regenerates another layer of cork/bark. (This video shows a tree being harvested on the island of Sardinia. Skip to 3:40 to see the cork coming off.)

High costs may be putting an end to the San Pietro harvests, Daino told me. The global financial crisis, which hit the U.S. in 2008 and Europe soon thereafter, led wine producers to seek cork alternatives. Glass and plastic were both cheaper and also eliminated the risk of a bad cork ruining a bottle of wine. The drop in demand also cut cork prices, making it impossible for producers to recoup harvesting costs.

Cork forest owners began abandoning their trees or cutting them down to use the land in other ways. The move soon led scientists, environmentalists and economists to study cork, cork forests, and the consequences of the move.

What they found is that cork is by far the most environmentally friendly to top a bottle. Glass stoppers, plastic corks and metal screw tops all require more energy to make and therefore release more carbon into the atmosphere. Although cork alternatives can be recycled, they rarely are. (Bottle corks cannot be reused but can easily be ground up and used to make other products such as corkboard or flooring).

In a larger sense, cork forests are hugely beneficial. They stabilize land against erosion and desertification and absorb CO2. Interestingly, they absorb more CO2 when the trees are being harvested regularly.

In addition, cork forests like rain forests provide the basis for extraordinarily diverse eco-systems of plants, animals, birds and insects. Finally, they benefit communities whose entire livelihoods are tied to planting and maintaining the forests and harvesting the cork.

One historic problem with cork is taint. A chemical called TCA can get into the cork, giving wine a moldy, musty smell. Cork producers are now checking for the chemical and claim to have reduced the number of so-called “corked” bottles to less than one percent of the total output.

In 2008, The Cork Forest Conservation Alliance was formed to encourage the use and recycling of cork as a means of protecting cork forests, located almost exclusively in the western Mediterranean (Portugal, Spain, Italy, Tunisia, Algeria, Morocco and France). Other environmental groups including the World Wildlife Fund have undertaken similar efforts.

Before visiting San Pietro, I actually believed cork was being over-harvested in unsustainable ways and that we’d soon use up all the world’s cork. How odd to discover it’s just the opposite, and that paying a little extra for real cork helps maintain existing forests by acting as an incentive to plant new trees. It also preserves existing jobs as well as the centuries-old Mediterranean tradition of uncorking wine.