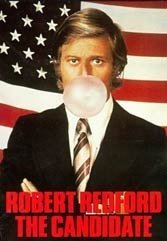 Robert Redford is at his peak, as an actor and a diva of his times, in Michael Ritchie’s documentary-style political satire about a young California liberal’s run for a U.S. Senate seat. Filmed at the height of resignation over Nixonian conservatism, it takes a Don Quixote attitude only to later attach cynicism and gallows humor.

Pro-civil rights, pro-ecology lawyer Bill McKay (Redford) doesn’t expect to win, choosing instead to use the campaign to bathe the state in listen-up liberalism (“A man who shoots from the hip and a man who’s hip when he shoots.”) But the charm works, and his campaign takes off. Now what? Water down the values is what. They won’t work in American realpolitik. McKay realizes that progressive rhetoric works only when you’re the bound-to-lose underdog. Redford is a genius in showing McKay’s awakening, a kind of scoffing self-mockery. Do well and you lose your bearings. Toward the end of the campaign, for example, he praises “the basic indifference that made this country great.”

But the for-the-ages punch-line comes when the unlikely becomes fact: “What do we do now?” Peter Boyle is excellent as Marvin Lucas, his campaign manager. Jeremy Larner’s screenplay also won an Oscar.