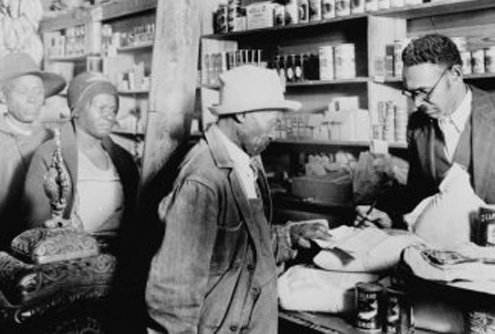 hough it had been a couple weeks since my wife and I moved back to the Mississippi Delta from London, I was still feeling uncertain in my Southern social graces. We’d only been gone a year, but re-acclimating takes time. I was still stuttering on my ma’ams and sirs. Our time away had made me unlearn the American southern tradition of meeting every face with friendly eye contact.

On this particular night — the first Saturday since we’d unpacked — I wore my favorite purple V-neck, skinny jeans, and bright-red Chucks, London outer ware for a drive to a friend’s house that would slowly reawaken me to the sprawling distances between Mississippi towns. They’re like commas in the long, drawling, flat sentences that compose the state’s highways. You can forget how long they can go on.

Until you realize your car is low on gas.

“Could you please find the nearest gas station?” I asked my wife Sarah.

Her phone showed a gas station 15 miles ahead. We turned off Route 61 into Mound Bayou, a small town on the outskirts of Cleveland. Curiosity got the better of my panic. Mound Bayou, population about 1,500, was the first town in Mississippi to have been established by former slaves. A farm settlement founded by slave-turned-politician Isaiah Montgomery in 1887, it’s been a majority African American community by a larger margin than almost any community in the United States. Montgomery and his cousin bought the cotton-rich Delta property, which was originally run only by former slaves. Unlike just about anyplace else in the late 19th-century U.S., there were no racial codes in Mound Bayou. Gas is important, but so is history. I wanted to catch a whiff.

We pulled into to where a couple of rusted pumps were lined up outside a convenience store.

There was no card reader — not in these parts — so I had to go inside. I tried to stride confidently into the store but the door was heavier than I though and it took a second try. The smell of fried food immediately seeped into every pore of my being. I looked around for the cash register.

Around me half-a-dozen people were scattered, seemingly waiting for something. Hidden behind the counter, one yelled something about dipping sauce. The woman beside me yelled “Yeah” back. I continued waiting a polite distance from the cash register in case there was a line or system I wasn’t picking up on. Call it inner caution. I tried looking relaxed and put my hands in my pockets.

One of the men hanging around finally noticed me. He turned around, pointed a finger at me, and made eye contact.

My words caught in my mouth but without thinking I blurted out, “Yeah, my wife’s in the car!”

“Nah man, I mean… do you need something?”

“EY!” he yelled to the back, to where the hidden voice had come from. “There’s a white dude says there’s too many negroes up in here makin’ him wait, he needs some gas to get on outta here!”

He turned back at me, grinning. I tried not to hesitate and smiled back.

“You know I didn’t say that!” I chuckled nervously.

The store then erupted in laughter. An older lady emerged from the back. “How you doin?” she asked kindly, clearly suppressing her own grin and extending her hand for my cash.

I pumped the gas, breathed out the fried smells and resettled my nerves. The pounding in my chest normalized, but I felt it. Finally, I calmed down and laughed.

Charlie Patton, a blues pioneer from Mound Bayou, would slap his palm against his guitar during rhythm breaks in his songs. In “Down the Dirt Road Blues” his slapping is just as hypnotic as his strumming, making the strings resonate. In a sweet howl, he sings: “I’m goin’ away to a world unknown / I’m worried now but I won’t be worried long.” In the beating and the strumming — which eventually merge — he describes who he’ll be in the future while acknowledging the present. The unknown is as calming as it is worrying.

“What took you so long?” Sarah asks me when I get back in the car.