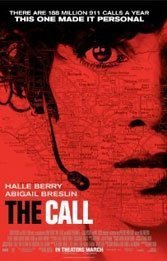 Brad Anderson’s above average low-budget thriller starts in low gear. Jordan (Halle Berry) is a stretched-to-the limit dispatcher at the “The Hive,” the L.A. 9-1-1 emergency call center. When a call ends badly — a teen girl dies shockingly — Jordan snaps. Suddenly she’s in the back seat, teaching wannabe dispatchers. Until unexpected circumstances put her back in the throes of a managing kidnapping — once again of a young woman.

From that moment on, Anderson (of “The Machinist” fame) kicks his story into another gear: tight, mean, ferocious, and ruthlessly dedicated to the details of presence of mind, including dispatcher, victim, and police. It’s an unconventional chase game between kidnapper and tracker with a human being and a mobile phone in between. Also in between are rage, fear and serendipity, all of which Anderson communicates with race-against-time fierceness. His film, in fact, is something like the diary of a day gone wrong, its unfolding action taking a toll across the board.

Berry is focused, her tense facial musculature doing most of the work. She’s ably supported, but it’s the first hour of the story and its pace, not the acting performances, that make Anderson’s sleeper a breath of fresh air. Late-to-appear serial killer tropes and girl power contrivances mar the whole, but there’s no arguing with Anderson’s early architecture.