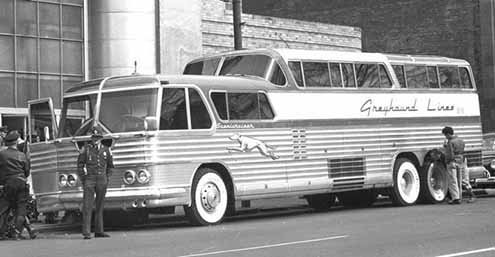 Once upon a time in America…
T

he other day I took a four-hour bus ride between East Coast cities. Some cringe when they hear that. Why I would do that to myself, they ask. “Do what?” I reply innocently. They insist: “Take the bus! Isn’t it awful?” I gaze back, neutral, as my most recent bus ride plays back in my mind.

4:26 p.m. Getting here early was such a good call. I’m the first in line to get on the bus. Of course, Corduroy Pants here on my left is trying to pretend he doesn’t see the line. But I’m onto to him. He got here late and getting in line would destroy his chances at a good seat, so he’ll do that annoying thing of just swarming the bus driver. Of course he has no luggage, and I do, so he might slip on ahead of me while I put my suitcase in the lower compartment. All I can do is send him mistrusting glances.

4:34 p.m. The bus is here, and only four minutes late. People who pay three times the price thinking trains are always on time just fool themselves. Okay, now it’s time to block Corduroy Pants from slinking up to the bus driver.

4:35 p.m. That spineless driver! Why didn’t he respect the line? Corduroy Pants pulled a, “Oh, that’s a line?” attitude. Just as I feared, he got on while I was stowing my bag. I don’t expect the driver to publically shame him, but he could at least call him out. He could pull a Seinfeld Soup-Nazi move and say, “No bus for you!” But that’s a lot to ask of someone who at this point has probably been driving on an interstate for 12 hours.

4:46 p.m. Wow, this bus is pretty crowded. Okay, don’t cave, Nora. Leave your carry-on on the seat next to you and continue to pretend to sleep. Do not make eye contact. Do not be a helpful, deferential woman —take up space. It’s four hours on the bus. Sometimes you need to set aside nobility and be aggressive. What’s the saying? “If you can’t spot a jerk on the bus that means it’s you…”

5:01 p.m. Wow. I’ve found a song I can listen to for the rest of my life. Next song? I think not. Replay! I don’t even notice that traffic has brought us to a standstill.

5:59 p.m. I mean, I love that I’m sitting alone, but what would really make this trip better is if the child in front of me were not pointing in my direction as its parents try to make it spit up. What if it has professional spit range? I guess I’ll have to dodge it. For now I’ll keep an eye on this creature that seems to not have taken its eyes off me since waking up.

>b>8:13 p.m. Corduroy Pants just went to the bathroom and I followed him back to his seat with my eyes. He’s stuck with someone sitting next to him. I guess there is divine justice after all.

8:49 p.m. This is endless. Baby spat up. Not on me. Phone battery low, socket doesn’t work. Never again will I take a bus.

8:50 p.m. We’re here! That was so easy! And I can’t believe it was only $25! It’s so completely worth it. Also that song is really good. Buses really are America’s best-kept secret. The best part is getting off.