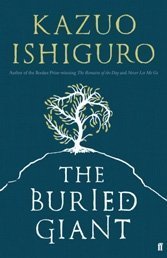 Who knew skilled British author Kazuo Ishiguro masked a rogue Tolkien-J.R. Martin gene ready to spawn Arthurian ogres and Anglo-Saxon folktales? But here’s proof, and Ishiguro produces a commendable if finally uninspiring fable. He manufactures a version of Iron Age Britain (Gawain, Arthur and Merlin all present or mentioned) and populates it principally with Axl and Beatrice, an aging Briton couple that lives in hollowed-out hills, happy but childless. Or so a narrator tells us until the duo sets out to visit their son in an unknown neighboring village. Son?

The contradiction — one of many regarding fact and memory — anchors the narrative, since both Axl and Beatrice suffer the effects of what Victorian England would later call the “vapors,” a loosely fitting and disorienting form of melancholy amnesia. The blur’s ostensible cause is she-dragon breath, one of many bits of cosmic lint the couple picks up on an odyssey that brings them into contact with tales of ogres, a dragon-bitten boy, a Saxon warrior named Wistan, a coven of treacherous monks, and the sage but weary Don Quixote-styled Gawain (“…nurtured… by the great Arthur!”) This motley crew will eventually converge on she-dragon Querig — to save or to kill her, depending on Briton or Saxon vapors.

The narration is effective; the story fairly simple; the underlying values those of friendship, loyalty, remembrance, and a notion of marriage as a carpet underneath which much is swept. The “mist” that keep “weary old couple” Axl and Beatrice from knowing who they were or are — or even for that matter if they’re living or dead — lifts the virtuous leads above the vengeful traumas that percolate around them. They’re omniscient for knowing too little, perhaps because they seek to forget pains too great, the real buried giant.

Though the allegory has its moments, a nagging question remains: why? Ishiguru has previously imagined a future of sad clones (“Never Let Me Go,” 2005). Is this folk-dive into tangled memory an equal but opposite effort to invest legend with a similar sadness? Or is it a vaguely opportunistic, even forced effort to take advantage of time when medieval tangents have returned to fictional fashion? The pedestrian climax makes the latter more probable. Here is a novel that loiters in a “bewitched place” awaiting magic that never comes.