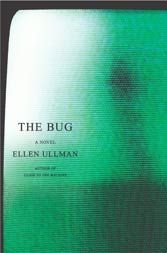 Ullman is Christmas for those seeking insight into the world of computers and programming. It’s 1984 (no Orwellian harbinger intended), and Roberta Walton, “primary tester” at Telligentsia, uncovers a bug in a major software program. She tells programmer Ethan Levin, “a skinny, apparently confident man.” The bug is laconically labeled UI-1017, “the one thousand seventeenth bug in the user interface.”

So what? thinks Walton.

But the innocuous bug turns capricious, eventually earning the name “The Jester.” This is a high-tech mystery story with philosophical overtones. The bug flushes Walton from her isolation and convincingly pushes Levin toward madness, claiming corporate casualties along the way. While trying desperately to trap The Jester, Levin types this line on his screen: “BEYOND HERE BE DRAGONS.”

Ullman, a computer pro, plumbs dragons like a dream. This is a deftly imagined story.