The Brief History of the Dead 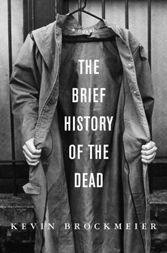 Brockmeier wrote children’s fables before turning to novels, which may account for his tender, unintimidating relationship with dusk. The story is this: after death, people migrate to a metropolis whose routines depend on living memories — “the city was not heaven, and it was not hell, and it was certainly not the world.”

Laura Byrd, part of an Antarctic research team funded by Coca-Cola, is the last survivor of a plague known as “The Blinks.” The dead city is the sum of her recollections. But she’s dying in the snow, and the sound of her slowing heart has a ripple effect. As she’s ovecome by delirium, the city — her city — mutates, decomposes. Coke and multinationals (which own Antarctica) take a bashing, but that’s not Brockmeier’s point.

Memory is a life of its own. Though derivative credit is due to Dante, Poe and Ambrose Bierce, Brockmeier creates a moody Limbo all his own.