The Boys of Summer 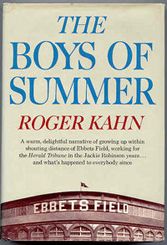 Kahn’s measured classic — a personal history of the Brooklyn Dodgers baseball team of the early and mid-1950s — suffers early effusions (“The noontime of the American Dream glows briefly.”) Yet few sports books are as loving and fewer still count such a vivid cast, including Jackie Robinson, who endured bigotry and humiliation (“Snowflake” and “Jungle Bunny” among the tamer chants) to break baseball’s fiercely-protected color barrier. “This guy didn’t just come to play,” rival manager Leo Durocher said of him, “He cam to beat ya. He came to stuff the goddamn bat right up your ass.”

Kahn doesn’t help the book by dwelling on his Brooklyn family roots early on, but once he scoots forward to tell of the team he covered for the New York Herald Tribune (beginning at age 24) the story turns on elegantly observed details. He puts the players through their paces on the field as a preface to tracking them down 20 years later. Preacher Roe, Clem Labine, Joe Black, Andy Pafko, Carl Furillo, Duke Snyder, Pee Wee Rees, Gil Hodges, George Shuba, Roy Campanella, Billy Cox — most all were poorly-educated men paid modestly to play the game they loved.

Their status diminished by 1971, Kahn finds them as construction workers, bartenders, salesmen, small-town bankers, farmers. Folksy poetry makes a home in their speech (of one player, Cox says, “He was so skinny, his shadow looked thinner than a bat.”) Former Dodgers President Walter O’Malley (who moved the team to Los Angeles in 1958) speaks in a “Tammany basso.” Aptness of tone is the book’s strength. In California, the retired Snyder takes Kahn to a nightclub where Eartha Kitt sings explicitly, to Beverly Snyder’s chagrin. “Sex exists, Bev,” says her husband. “I know it does,” she responds, “and it’s very beautiful and very private.”

Kahn’s prose is similarly private, a long whisper of intimate quotations that seamlessly merge gentility and vulgarity, honor and retaliation. Toward the end, Kahn respectfully chronicles the “love, respect, and vintage” between Robinson and his wife Rachel. The phrase applies to Kahn’s view of this venerated team.