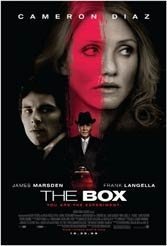 See here, Mr. Richard Kelly, wunderkind director: If you’re going to make a movie that nibbles at Sartre, Dante, Arthur C. Clarke, The Twilight Zone, The X Files, Hieronymus Bosch, and tangles with touchy matter of free will and who we are as a species, then please for the love of God (assuming he exists) decide just what it is you want to say. Here, it’s as if mystery required confusion for traction, which, sir, it does not.

In 2001’s “Donnie Darko,” a wonderful handful of oddness, Kelly transformed an unstable adolescent into a teenaged visionary courted by the apocalypse. This time, he takes a Richmond couple, Norma and Arthur Lewis (cardboard-like Cameron Diaz and James Marsden), he a NASA engineer, she an English teacher, and makes them into Bicentennial Year 1976 lab rats for a predatory agent (Frank Langella as the deformed Arlington Steward), possibly a Martian, possibly a divinity, perhaps both, struck by lightening and back from the dead and now eager to test and probe humanity’s weaknesses to report back to his “employers” — shades of “The Day the Earth Stood Still” — about the feasibility of the human race.

His 24-hour “test” is box containing a button: Press it and someone dies, but you get a million bucks. Refuse and the offer and the m angled Mr. Steward to move on. Button pressed by Norma, Sullivan triggers a sequence of curiosity-killed-the-cat events that include time-space tunnels, amniotic baths, holy damnation, levitation, and creepy-looking world-conquest maps, all of them orchestrated by the ever-conniving Mr. Steward.

The result is an eerie but overwrought “Twilight Zone” knock-off, a show to which Sullivan’s narrative pays homage (though the script s based on Richard Mathieson’s 1970 short story “Button, Button”). The fantasy’s strong suit is Langella’s Steward, a cryptic figure whose elegant but laconic enunciation gives the story its ominousness.

The weaknesses is in opening more philosophical trap doors in 90 minutes than 10 films could close in a 100 sittings, which might make Mr. Sullivan mighty proud, but is of little help to even stalwart viewers. Lucidity doesn’t mean shortchanging the occult, but simply deciding among its flavors. “The Box” is the whole ice cream shop and more, transforming so much abundance into tedious torment.