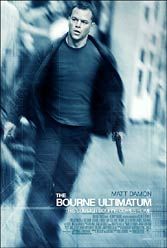 The Bourne trilogy climax (barring prequels and sneak sequels) is action exploitation to the nth degree. Everything’s polished: pacing, locations, mortal combat. But aside from the Manhattan culmination (where in-form Albert Finney commands), it’s same old, same old, which is to say laconic Jason Bourne (Matt Damon) tackling his rogue past with a vengeance. The formula dispenses with humor (a time-waster), forgoes wit (who needs it?) and worships the word “asset,” which apparently sounds intelligent.

That’s not to say veteran Bourne director Paul Greengrass (“United 93”) comes up short. Quite the contrary. He honors all his mayhem-in-a-blink intentions (the Tangiers sequence is breathtaking. In some respects Bourne is an archetype for the post-Cold War, action thriller in which nonstop assassination and panoramic tourism (London, Turin, Madrid) are hawked in sex’s and style’s stead. Greengrass can argue that character is irrelevant. After all, the movie’s passengers, with the exception of CIA Joan (of Arc) Allen and bad guy David Straithern, are headed for dead.

That Bourne is closing in on his real identity — no more girlfriend delays — gives Greengrass full throttle into boom-boom basics. Damon the actor is mostly lost to these pyrotechnics, a pity since behind all that austere mourning and melancholia lurks a vivid creation.