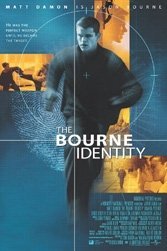 The first of the Ludlum-Bourne trilogy is arguably the best because director Tony Gilroy actually builds characters from the ground up (thank Doug Lyman for the script). Matt Damon is amnesiac CIA assassin Jason Bourne, who comes hard to his identity. Franca Potente is Maria, the pretty but convincingly wary German woman he drafts into his quest for identity. Chris Cooper is CIA bad guy Conklin who wants to reign in his Europe-hopping “$30 million malfunctioning weapon.”

This is Manchurian Candidate meets Eurail Pass with Cold War syncopation. Damon and Potente are entirely credible (there’s a tender first kiss instant) because Gilroy nourishes their relationship rationally, with incumbent doubts and loose ends. Sex never fills in gaps. Nor does violence. “I can’t remember anything before two weeks ago,” Bourne tells Maria. “Lucky you,” she responds quickly. Wit merges with tangible desperateness, Damon’s, to give a fairly straightforward narrative compelling traction.

Later, Gilroy and Co. morphed the franchise into a chase-a-minute frenzy. This one’s actually about believable people in a bad mess.