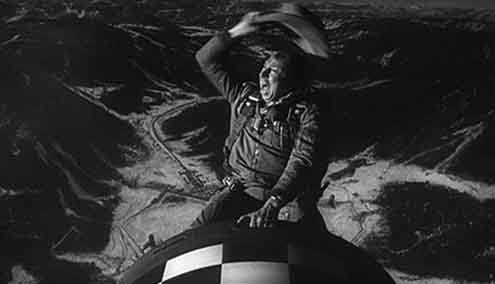 Slim Pickens in Kubrick's "Dr. Strangelove": damn the torpedoes, full speed ahead.
I

t is fast becoming clear just what Donald J. Trump had in mind when he spoke of making America great again. He is that greatness. He, the newly minted commander-in-chief, will personify an impulsive, larger-than-life America. He’s been granted the world’s biggest reality show stage and intends to perform on it unscripted while transforming the jitterbug U.S. into a corporate and cultural brand that reflects an eccentric mix of “nation-rebuilding” goals. Those who dislike change, resist inflated egos, and hew to protocol are in for a very rough ride.

Trump’s gift to his rabid fans, at least as he sees it, is a total loyalty to self and its subjective preferences — traits that lend his character to a Stanley Kubrick parody (anyone remember “Dr. Strangelove?”). He needs no advisors to tell him which call to make. He’ll call who he pleases, when he pleases, whether it’s in Taiwan or Moscow. He’ll blunder his way through incomprehensible and occasionally offensive remarks while unflinchingly awaiting applause. These tendencies are likely to unsettle a diplomatic order that since World War II has leaned heavily on more cautious public gamesmanship — with Ronald Reagan’s labeling of the Soviet Union as the “evil empire” considered the boldest of extremes.

Is blurting things out unfiltered intrinsically a bad thing? Not necessarily. Upending the rules, rudeness included, can refresh stale air. Some hunches are worth playing.

The problem is that symbolism and subtlety, equally valuable, have never played much of a role in the loudly macho me-first bubble in which Trump and his coterie of by male acolytes and compliant women have resided for decades (his penchant for compliant, eastern European femaleness is no accident). In Trump’s vision of the world, and now America, the boss is the boss.

If the boss calls Taiwanese president, offending the Chinese, what of it? Didn’t he say during the previous episode that the Chinese needed some rattling? As for cozying up to new pal Vladi Putin, that, too, is his prerogative — and yet another jab at Beijing. So what if he wants to take a road trip through Pakistan and Kazakhstan? Maybe he’s got a deal, or deals, in the works.

Again, this Entertainment Tonight version of Gunboat Diplomacy well and good until it runs up against the reality that not all respond well to rule by. Cultures with pre-modern roots are especially attuned to symbolism and the violating of their norms. In China, offense taken is rarely in passing. All sticks; all is remembered.

Then there’s the matter of the State Department, whose post-1945 emphasis on back room dialogue has so far averted a third world war. What role can its actors play if mostly shoved aside by an irrational chief determined to wear jeans to a black tie dinner, or vice versa?

The chief may be satisfied and amused by his choices, but how do they make others look? If embarrassed, in what way do they respond? And to whom do they complain, since the Trump is likely to trump (and mostly ignore) his Foggy Bottom midwives?

The creation of a kind of global casual Friday on which anything utterance goes will be both amusing and intriguing until suddenly it’s not. Eventually, those who still swear by protocol — and they exist — will grow restless. And it’s no comfort that the boss considers his new defense secretary a latter day George Patton — the wartime general beloved by Richard Nixon and lionized by imposing actor George C. Scott (never mind that the actual Patton was smallish and spoke in a squeaky voice).

Trump will not be unsettled by any of this. His United States will be a corporation and a brand whose best interests he’ll always insist he takes foremost to heart. Any feathers he might ruffle he’ll rationalize advancing some aspect of American greatness. Commerce, he’ll reason, will fix the rest. As for his raging or flattering post-midnight Tweets (the “sleep-on-it” approach definitively defeated), these will be portrayed a right of boss-dome — producing a deeper and more troubling confusion between nation and self.

Call him larger-than-life, self-involved, pubescent, needy, theatrical, ignorantly narcissistic and maverick, since he’ll borrow from each. Boss Trump sees what’s to come as show business, if not the greatest show on earth, and like it or not he’s the unchained star.