The Book of My Lives 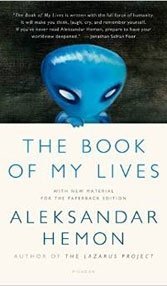 It is unsettling to watch an otherwise superbly alert autobiography suddenly molt into darkness. Yet that is what happens in Hemon’s “Lives,” eight-tenths of which is a poignant, funny, bittersweet reflection on the author’s Sarajevo upbringing (music, chess, girls, and nihilistic parties), the war that tore Bosnia apart, and his often comic pilgrim’s progress to a new world called Chicago, with its strange customs and cluster of melting pot immigrants. These interconnected recollections— many previously published but refined here into a fine pastiche —preserve their original smells, aromatic or foul. Hemon is in some respects a latter-day Conrad, an author trained in another language and linguistic tradition but granted mental dexterity and stubbornness enough to engineer a command of English few natives would know to imitate let alone match.

Hemon’s American transplantation is study in personal and cultural identity, as well as a reflection on how cultures pretend to absorb newcomers but in fact do no such thing, instead erecting palatable us-and-them distinctions that both displaced immigrants and old residents unwittingly embrace as a collective exercise in deceit and fantasy. “Immigration,” writes Hemon, “is an ontological crisis because you are forced to negotiate the conditions of your selfhood under perpetually changing existential circumstances.” Settled in Ontario, Hemon’s sister works at Taco Bell, which she promptly labels Taco Hell, while Hemon simmers his way backward to tales of pre-ruined Sarajevo.

But then, suddenly, after sublime recollections of his post-immigration Chicago wanderings, the author falls in love and marries (a second time). And has daughters, the second of whom, while still an infant, is diagnosed with a rare and aggressive form of brain cancer. This horrid event, in all its relentlessly medical anti-glory, transfixes the author and triggers a priority-check (“Isabel’s illness overrode any kind of imaginative involvement on my part.”) Lives are made from different ores, some more precious than other, and Hemon forcibly switches gears from fine wryness to bleak anguish to honor what matters most.

As the diary-like story of a brilliant writer’s childhood-to-40s odyssey, and the storms and sunrises along the way, “Lives” is the studied work of a superior intellect. But when the raging, humbled Hemon turns to his infant’s twilight (“our catastrophe…”) he hosts a “continuous secretion of sorrow” that soon defers to medical acronyms and eventually distracts from if not obliterates all that came before it. Which is why Isabel’s terrible tale should have been contained in a separate exercise dedicated to illness, to parenthood, to physicians, to catharsis, to guilt, and above all to the contours of grief.