The bonds that tie 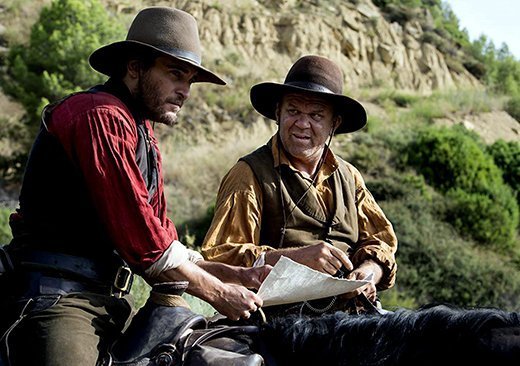 he scene that best defines “The Sisters Brothers” takes place along a river bank in the remote, anarchic, gold-rush California of 1851, when the film is set. Eli Sisters (John C. Reilly), a hired gun, and John Morris (Jake Gyllenhaal), a detective no less capable of killing, are engaged in the same activity: brushing their teeth. It’s (too obviously) a metaphor, not only for how tough men can change, but for the civilizing process that will in the coming decades transform the region, the nation, and relations among men.

Based on a 2011 book of the same title, by Canadian Patrick deWitt and short-listed for the Man Booker prize, the story involves four men with very different perspectives on life and the self, arranged in a hierarchy by award-winning French director and co-writer Jacques Audiard, in his first English-language film. In the middle of this hierarchy, as the tooth-brushing scene suggests, are John Morris and Eli, thoughtful men capable of change. John Morris’s conversion is rather sudden and, therefore, less than satisfying, while Eli — who is at the heart the film — wrestles throughout with his desire to move on from peripatetic gunfighting to an imagined, yet powerful, rooted domesticity. His relationship with his horse, Tub, suggests an emotional range beyond that of his companions.

The other two characters are opposites, one at each end of the hierarchy. Eli’s brother Charlie Sisters (Joaquin Phoenix) appears bereft of introspection, inured to a life of violence, which he sees as immutable, part of his DNA. He’s convinced, even, that his employer — the Commodore, a mythic figure barely seen in the film and the puppeteer of all this violence — is, in fact, a victim. Occupying the other end of the spectrum is Hermann Kermit Warm (Riz Ahmed), a caricature of the rational, examined life. Warm is a chemist who claims to have discovered a process to separate gold in mountain streams, and who looks forward to creating a cooperative community in (of all places) Dallas. He’s a guru, promising both alchemy and utopia.

John Morris and the Sisters brothers are contractors hired by the Commodore (Rutger Hauer in a non-speaking role); their job is to find Warm and come away with his secret formula.

The film is based on Canadian author Patrick deWitt’s novel of the same name.

Like John Huston’s “The Treasure of the Sierra Madre” (1948), another mining film grounded in psychology, “The Sisters Brothers” is underlaid with issues of fathers and sons. All four protagonists struggle to distance themselves from difficult or abusive fathers, in one case leading to patricide, in another to the rejection of an inheritance. The strong bond between brothers Eli and Charlie — and their different takes on what life has to offer and how much one can shape one’s own experience — is a product of what happened to Dad one fateful night years ago. Despite his lack of self-knowledge and experience managing men, Charlie harbors a long-suppressed desire to replace the Commodore (that is, replace the father) as the head of the operation, even if — or perhaps, especially if — that means killing him. Although the fathers-and-sons material is not novel, it is critical to the film’s interpretive structure, and it is presented here with admirable restraint.

“The Sisters Brothers” is a male film. It’s about brothers, about male bonding, about all-male mining and killing activities and, of course, about fathers and sons. The one woman who appears by name in the film is the detested boss of a newly-created town, as well as the madam of the whorehouse. She’s referred to only by her last name, “Mayfield,” is referenced with male pronouns by Charlie and Eli (“glad to meet the man of the house”), and is played by transgender actress Rebecca Root.

Naming is important not only with respect to Mayfield. John Morris is always called by both his first and last names, suggesting he’s in a class above Eli and Charlie. And why is the brothers’ last name Sisters? Is their bond so strong that they are both sisters and brothers to each other? That no female is necessary to their lives?

Like most Westerns, “The Sisters Brothers” requires a willing suspension of disbelief; our heroes (or anti-heroes) too often miraculously survive hails of bullets rivaling the Great War’s Western Front. The film’s implication that Warm’s gold alchemy may actually work strains credulity while avoiding the recriminations and conflicts that would inevitably arise when the participants discover that their faith has been misplaced. And John Morris’s accent is, let’s say, a bit odd.

As in the two Westerns that were among the best films of 2015, Alejandro G. Iñárritu’s “The Revenant” and Quentin Tarantino’s “The Hateful Eight,” this film too readily taps into modern audiences’ desire for blood and gore.

These weaknesses aside, this is solid, even inspiring film-making. “The Sisters Brothers” is both a compelling adventure and a taut psychological drama. The acting is impressive throughout the ensemble, and Reilly’s sensitive, nuanced performance as Eli may be enough to elevate him into the current ranks of our best actors.