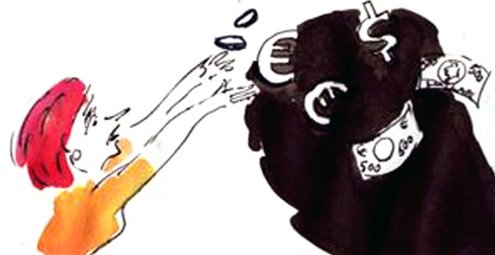 When you think you have remodeling costs under control, something else comes up. Drawing by Suzanne Dunaway.
E

veryone says when you remodel a home in Italy it costs twice as much and takes twice as long as expected. A year after buying our Italian dream home, I can safely say they are wrong — both are underestimates.

Like most expats, my husband Colin Buckley and I thought our experience of buying and redoing a home in Italy would be different. We weren’t like those Americans or Brits who buy from abroad and pay thousands extra in fees. We had lived in Lucca, a walled city in Northern Tuscany, for five years and had local knowledge. We spoke Italian and understood the housing market. We knew realtors, builders, a geometra and even a notary. We had watched our friends get stuck with builders whose sole talent appeared to be finding ever more expensive problems to fix. We would profit, we assured ourselves, from their mistakes.

As it turned out, we were wrong — about a lot of things.

Our first mistake was to wait. We moved to Lucca from London in 2002, when prices per square meter hovered around €2,000 and tourists in town were still a welcome sight. Everything seemed so cheap to us compared to London, where walking out your front door cost £100. Rent ran a third and so we took a place for a year inside the city walls.

By the time we got around to buying in early 2007, tourists clogged the cobble-stoned streets — annoying the locals who zip around on bikes — The New York Times had pronounced Lucca’s food among the “most compelling” in Italy (it’s not) and the British, Dutch and Americans were snapping up properties as if it were Siena. Meanwhile, the dollar had plummeted — we’re Americans and are paid in dollars — while per-square meter prices more than doubled. Over a five year-period we shelled out €60,000 in rent, much to the delight of our Lucchese landlords.

We could have bought a newly renovated apartment, but we wanted something truly our own. We chose a fixer-upper with a leaky roof. You could actually see the sun shining through. No matter, I thought. At €2,500 per square meter, we still had a bargain. Our realtor, Lorrain Fontana, a lovely South African who made buying easy — a year after the sale she still resolves our utility bill problems — said we got a steal.

To some degree she was right. We bought a big apartment on the top floor of a building on Via Fillungo, Lucca’s main shopping street. It has big windows and lots of light. There’s an eat-in kitchen with a balcony, two bedrooms, space for two bathrooms, the potential for two fireplaces, and a large living room that opens up two levels to a mansard roof. One day we can build a mezzanine floor. For this we paid €350,000 and the bank immediately valued it at €400,000.

How smug I felt after the closing! Everyone teased me for taking more than a year to buy. I saw so many apartments inside Lucca’s walls that realtors were asking me for advice. I kept a spreadsheet on every apartment, with information on the number of bedrooms and bathrooms, potential storage, the quality of the view and the lighting. It listed whether there was a loggia downstairs and room for bikes, the cost per square meter and the potential return.

When people spoke of closing costs of 10 percent, I smiled. We paid just over seven percent. I was on top of everything. We knew a notary, yet I still hopped on my bike and in two afternoons visited everyone in town to get a good price. In the end, our realtor found the best deal. We used a mortgage broker, Kiron. Normally they charge two percent of the money raised, but I haggled them down. (For the record, they’re worth two percent because they can get deals foreigners can’t.) When people spoke of per square meter remodeling costs of €1,300 to €1,500, I thought, we’ll see about that.

We closed the deal at the end of March 2007, and that’s when we made another big mistake. I left Italy, at least temporarily. Colin had left earlier. He was consulting on a World Bank project in Tbilisi, Georgia. How else do you afford a home in Italy but to earn a non-Italian salary? He returned as often as he could. I stayed behind to find us a home. Soon after the closing, though, I joined him.

Someone could manage the renovation project for us. The only question was who: the experienced geometra who worked on the purchase and knew every builder in town? Or a young female architect, with little experience, but a great attitude, who we met through Lorrain? The geometra asked no fees, but charged five percent of the cost of the work. He gave us some rough estimates on the total. The architect asked for €7,000 plus IVA, and handed us detailed estimates from different builders. Here Colin erred. He let me decide. I went with experience.

Then we waited. A month went by. And then another. Absence doesn’t make the heart grow fonder, we learned. People forget about you. By June with no serious estimates from the geometra and designs that didn’t look like what we’d discussed, we said to hell with experience and hired the young architect, Francesca Adragna. Of course, not before paying hundreds more euros to the geometra for his time and useless designs.

We’ve had our problems, but Francesca has never been one of them. Within a few weeks of hiring Francesca, a native Sicilian with a great eye for design and a mind like a lawyer’s, she’d called our neighbors to discuss the roof and prepared most of the paperwork to get us started remodeling. To this day she sends us email updates in English, a language she barely speaks.

Summer’s a lousy time to start a remodeling project. Builders are busy. And then they disappear. Francesca solicited quotes, but the process was slow and by August everything shut down. Then there were more quotes to get, more permits and scaffolding to erect. Three months slipped by.

The real trouble came as our plans expanded. Call it slippage. We had an estimate of about €100,000 to redo floors, pipes, bathrooms, hydraulics, a kitchen, wiring, walls, windows, etc. But then we thought, wouldn’t it be nice to tear down some walls to open up the living space, install a skylight, enlarge the entrance to the main salon and also into the kitchen. How much could that cost? Then we imagined a longer balcony that would extend to the master bedroom, and French doors that opened onto it. I’d always hated noisy old radiators and they take up so much space. How about under-floor heating? It’s only a few thousand more. By October, our €100,000 project was starting to look more like €200,000 and work still hadn’t begun.

In early November, work finally started. Not long after, the first calls came. With so many walls down the roof needed support. We would have to immediately install a safety beam for the workers to continue. It didn’t cost a lot, and we had no choice. Then there was a sewage problem on the building’s first floor, which every neighbor had to pay to repair. We were happy to chip in. Back upstairs, a wall in the kitchen needed additional work — again a negligible cost — and part of an exterior wall turned out, frighteningly enough, to be paper-thin. We’ve yet to learn that cost.

Some things cost less if you do them all at once. As long as we were ripping out nasty old tiles, we might as well do the same on the mezzanine level even if it would be years before we remodeled there. Waiting would cost twice as much later because we’d have to get permits again and reinstall the long garbage chute and scaffolding outside our apartment. Another €2,500 gone.

It was around this time that I started worrying about cash. By then we were both earning money in Tbilisi, but an awful lot was going out in Lucca. Monthly mortgage payments had made a serious dent in our remodeling fund. Airfare from the Caucasus isn’t cheap. Worse, since buying the flat, the dollar has slid 17 percent against the euro. Convinced it would recover we never moved our U.S. savings to Italy.

Strangely, while I’d been so diligent about everything else, when it came to actual cash I turned a blind eye. We had set aside enough to begin with, but as costs increased and cash dwindled, I simply didn’t think about it. This was our dream home after all. Everything would be fine.

By February when our first big bill arrived for €19,000, I confessed to Colin that we might have a problem. We did a little math and quickly retracted some of those earlier design choices. There would be no bigger balcony, no French doors, and no expanded entrances into the kitchen and salon. Some decisions were too late to reverse. The radiators, for example, I’d thought so ugly, suddenly seemed just fine. But they had long ago been tossed out and the under-floor heating ordered.

Now it’s late spring, a year after we bought our home. We were told by the first geometra it would be ready by last summer’s end. Francesca predicts this August, but that may be optimistic. Our neighbors are still arguing over the cost of the roof. Throughout it all, Colin’s been a good sport. Me, I feel like a fool.

Then again, you might say we’ve been lucky. We haven’t been around much during the remodeling. So far, the additional problems haven’t been too costly. The trouble is that lots of little costs add up. Before you know it, your bargain apartment is running more than half a million euros.

In the end, are we sorry? It’s too soon to say. I hope one day to look back, smile sagely and declare it was all worth it. In the meantime, if anyone’s interested in a half-finished flat on Lucca’s main drag, please give me a call. It’s like a dream.