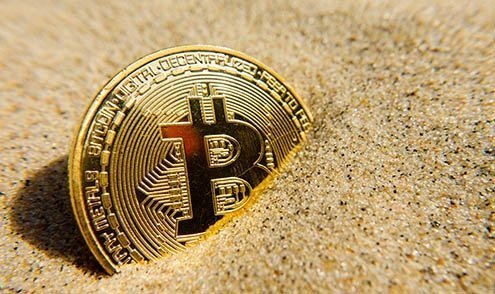 Bitcoin's performance has classic bubble signs, but its challenge to the status quo is no joke.
I

n recent months, Bitcoin has exploded into the popular consciousness. The price of the digitally traded cryptocurrency and its peers (including Litecoin and Ether) has soared and plummeted in trademark bubble style. Given the profiles of its early acolytes — generally young, technologically savvy, and colorful— digital currencies have generated a kind of unfolding mythology.

Bitcoin in particular has been a lightning rod for economic sages. Skeptical from the start, Warren Buffett warned that Bitcoin would “come to a bad ending.” JPMorgan CEO Jamie Dimon labeled cryptocurrencies a “fraud,” only to later amend his stance, saying he’d be open to them if properly regulated. IMF chief Christine Lagarde has said a responsibly constructed digital currency could possibly replace central banking.

For now, speculating on the future of Bitcoin is a paradise for those who see themselves as economic futurists or —worse —”thought leaders.” As a result, Bitcoin is serving as a bellwether for current economic thinking.

The existing financial system depends on trust. Trust that a dollar bill in hand is actually worth something. Trust that the bill itself is not a fake or a double. Markets create such trust by investing it in specific authorities. Most people trust the U.S. Federal Reserve. Similarly, they also trust Citibank and the other major institutions that make up most of the global financial infrastructure. But that trust involves the linkup of countless intermediaries, and it comes at a price: transactions fees.

Bitcoin and similar cryptocurrencies eliminate intermediaries. When two parties conduct a transaction using cryptocurrencies, a decentralized network of computers competes to solve a cryptographic problem (hence the name). In the process, the computers verify that the transaction hasn’t occurred before (eliminating the chance that money is spent twice) and go on to validate the exchange.

Bitcoin provides an elegant way to sidestep human credibility and trust by replacing them with an objective, scientific measure, namely the solving of the cryptographic problem. A technical “bypass” solves the human problem.

Skeptics note that cryptocurrencies — still on the outskirts of the financial system — have so far failed to live up to their promise of cheaper and faster financial services. Technical complexities make cryptocurrency transactions far slower and more expensive than their traditional competitors. That such a burden persists as rivals Visa and MasterCard churn ahead points to the need for more work, if not retooling.

As the Financial Times has noted, the limitations are severe enough to limit cryptocurrency interest mostly to those locked out of the existing financial grid and therefore willing to underwrite a separate infrastructure — notably criminals.

Predictably, cryptocurrencies have provoked practical and political problems for policymakers. In January, the Office of Foreign Assets Control, the administrator of U.S. sanctions policy, had to respond to a question about Venezuela turning to cryptocurrency to avoid U.S. economic punishment. Similarly, the currencies have been linked to hostile governments and terrorist movements. Though Citibank has a vested interest in cutting off North Korea’s nuclear program, an impersonal global network of computers does not. In fact, the network cannot even recognize such a threat.

Given its rollercoaster prices and persistent technical problems, Bitcoin is unlikely to become a permanent fixture on the financial scene. At the same time, its underlying technology, which hinges on redefining trust and authority, may eventually, in a more evolved form, take over the world. That may seem very seductive, at least now.

During the Obama years, many of his supporters grew comfortable with his exercise of executive power and with presidential authority in general. Liberals came to see presidential prerogative as a useful means of making policy. Many of Obama’s greatest accomplishments, at least in the eyes of his allies — such as the pro-immigration Deferred Action for Childhood Arrivals (DACA) and the Iran nuclear agreement — were the product of executive branch decisions.

Now, as Donald Trump rolls back these policies using his own executive power, all the while promulgating more conservative policies, authority may no longer seem like a force for good.

In that sense, Bitcoin and cryptocurrencies symbolize escape. When authority seems like a force for ill, it comes, as no surprise that a digital system that circumvents the human problem of poor leadership would find support.

But the troubled experience of Bitcoin should serve instead as a cautionary tale. A technical solution to a human problem has in fact backfired and led to all sorts of unintended consequences. What began as a utopian idea for cheaper financial services has enabled malware attacks, including the WannaCry virus that held the British National Health Service hospital system hostage in May 2017.

But Bitcoin is just a symptom of a larger malaise. Facebook, for example, has struggled mightily to create algorithms that would keep the proliferation of allegedly bias news in check — with little success.

Ultimately, though, trying to cancel authority is an abdication of responsibility. It is a sign of a population giving up on positive change. Rather than taking on the demanding task of changing a long-standing and functional system, people are intent on finding ways to flee it, and that alone is troubling.