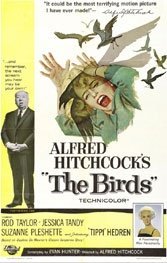 Hitchcock’s chilling merger of claustrophobia and menace has the off-kilter rhythm of a journey to the center of the earth. The face-value story favors the director’s longtime fascination with obsession. What begins as a near-romantic comedy interlude — Mitch Brenner (Rod Taylor) buying love birds from pretend sales clerk Melanie Daniels (Tippi Hedren), who is really a San Francisco socialite — knifes awry.

Hitchcock’s lovebirds are an omen in Melanie’s hands. She’s spoiled and determined. Like so many Hitchcock beauties, she’s also the bringer of the plague. Birds in the bay are misbehaving. Lydia notes that her chickens have stopped eating. Annie grows wary of Melanie’s intentions. As the contest between the two women throbs, the birds become nervous, then aggressive, finally lethal. Experts dismiss the event: Birds are birds; they aren’t intelligent enough to organize attacks.

But the birds of metaphor are, and Hitchcock is manipulating the perils of egotism and desire. Like a Greek god frolicking among mortals, Melanie calls shots she doesn’t fully understand or control. The power Hitchcock invests in beautiful blondes is pathology unto itself. But aside from that, the film ranks with the best science fiction. It’s subversive, creepy, relentless, with a finale that thankfully resolves nothing. When obsession is in the air, what you least expect turns thrillingly against you.