The Big Red One 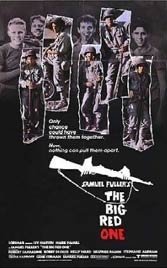 If John Wayne was Hollywood’s most romanticized soldier (upright, strong and decent), Lee Marvin was among its grittiest. In writer-director Sam Fuller’s remarkable film he pastes his blue collar, vaguely criminal looks on combat, which is by all accounts is largely blue collar and vaguely criminal. Fuller’s film endures as flamboyant monument not only to Marvin’s abilities, but also to a willingness to make a World War II film with the kind of hard knocks previously limited to the Vietnam War, which Hollywood transformed into a soul-searching exemplar.

Fuller’s story traces the forays of a Marvin-led squad of the 1st Infantry Division, nicknamed the Big Red One (the red numeral emblazoned in the uniform). Since Fuller won both the Silver and Bronze Stars for combat heroism in Europe, who better than him to put Sarge Marvin through the paces? They begin with black and white flashbacks to Marvin as a World War I private forced to make peace with no peace, and unfairness. He stabs dead a German soldier who is trying in vain to tell him the war is over.

By the outbreak of World War II, now-Sarge is in charge of a rifle company — “The Sergeant’s Four Horsemen” — trudging through North Africa, Sicily, into France on Omaha Beach, and finally to a concentration in Czechoslovakia. Private Zab (Keith Carradine) narrates the day-to-day, but Sarge is the whole heft, with Fuller constantly working to put combat in the context of a job, a means to an end, and not a psychopathic vocation. (“We don’t murder, we kill,” insists Sarge).

But Zab remains cynically grunt-like: “You know how you smoke out a sniper? You send a guy out in the open and you see if he gets shot. They thought that one up at West Point.” Here’s a working class movie about working class stiffs called soldiers. Before issuing hosannas to Spielberg-powered Private Ryan and the later TV “Band of Brothers,” smoke this.