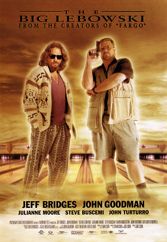 Joel and Ethan Cohen make comedies whose kinkiness glows in the dark. “The Dude” (Jeffrey Lebowski, Jeff Bridges) is a California weed-smoking loser who bowls with zany deadbeats Walter (John Goodman), an irrepressible Vietnam vet, and the rodent-like Donny (Steve Buscemi). When a urine-stained rug embroils The Dude in a mistaken identity case, it’s Dashiell Hammett meets the Marx Brothers (and who says it never happened?) The Dude butts heads with mad Latin bowling legend Jesus Quintana (John Turturro), inept nihilist bikers, a bondage freak artist who wants a baby (Julianne Moore), and assorted ambassadors of loony perversion. To say Bridges, Goodman & Co. have fun doesn’t capture the overall effervescence. The Dude is out of his mind and over his head. Bridges is a stoned-out marvel. But so is everyone else. If David Lynch did comedy he’d want know what the Cohen’s eat for breakfast.