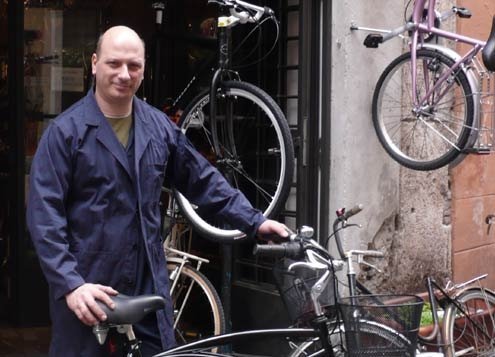 irector Vittorio De Sica’s 1948 masterpiece, Ladri di biciclette (“Bicycle Thieves”), is the bittersweet tale of a working-class man in devastated postwar Rome who combs the streets searching for his stolen bicycle with his young son in tow.

Protagonist Antonio, wife Maria and Bruno live in abject poverty. Losing the bike puts the family on the brink of destitution. Though I’ve seen the film several times over the years, it strikes a different chord now that I live in 21st century Rome.

It’s hard to imagine a period in Rome’s modern history when cars, mopeds and scooters weren’t the city’s primary forms of transportation; when bike ownership could make or break the lives of an average, urban family.

Immediately before and after the war, bikes were not only essential to daily life but also the stuff of legend. Most Italians were riveted by the exploits of bicycle racers Fausto “Il Campionissmo” Coppi and Gino “Il Pio” Bartali, whose European fame made them Italy’s biggest sports stars.

Italy rebounded economically in the 1950s. The Vespa began booming. Mini-cars got a new push. The Fiat 600 was launched in 1955 and the redesigned Fiat 500 in 1957. A burgeoning middle-class gradually welcomed the comfort and prestige that came with owning a car. By the end of the 20th century, the bike as a form of daily transport was almost extinct.

But progress often comes with sacrifice. Like other major European cities, Rome was gradually forced to acknowledge that there was nothing “dolce” about a life plagued with gridlock traffic and high levels of air pollution that threatened both the health of residents and the stability of soot-encrusted monuments.

In 2005, then-Mayor Walter Veltroni produced legislation in an effort to control traffic and limit pollution. The historical center was barred to traffic three Sundays a month. Car and motorino use was limited once a week, favoring those using bio-fuels and clean-filtered diesel. On Thursday, major thoroughfares were opened to cars with odd and even-numbered license plates on an alternating basis. The so-called Fascia Verde (Green Zone) restrictions have been bitterly resisted by some drivers, and some have been cut back or even rescinded.

But before Veltroni left office, he set in motion a plan to help bring back bike riding. In June 2008, the city joined with the Spanish company Cemusa to create “Roma Bike,” a program designed to allow residents rent bicycles by the hour or day from racks set up near major piazzas. Since then, the venture has been taken over by the city’s transport system, ATAC, and extended to let users hold on to bikes overnight (for information, call 06.57003).

The program itself was a hit and served as a catalyst for the upgrading of privately-owned bike rental shops. Some tourist agencies have begun to offer “Rome-by-bike” tour packages.

Meanwhile, I’ve been astounded by the number of bicyclists negotiating paths through narrow streets and plowing through high-traffic zones. I’ve also been struck by the elegance of the bikes. Some have mod-brushed aluminum, pastel colors and sleek black frames; others fitted with leather seats, handlebar grips and saddlebags. Leave it to the Italians to make something as perfunctory as a bicycle chic!

Many of the bikes bore the trade name Collalti. That in turn led me to the Collalti shop, which is located in the heart of the city and has been manufacturing bicycles since 1899. Depending on your budget, the current capo, Danilo Collalti, will gladly set you up. You can choose between a bike that might grace a Milan catwalk or a more austere and affordable one. Prices range from €200 to €1,500. They have touring, city, mountain and hybrid models.

An avid rider, I decided to join the ranks of the intrepid urban biker. With Danilo’s able assistance, I settled on a shiny, black cruiser that went for €200. We added gears and he agreed to attach a basket and a bell (don’t forget to buy a good lock; bicycles thieves haven’t gone away!). The total package came to €280 — less than I spent, with the accoutrements, for a similar, off-the-line bike in the States.

The bicycle was ready in less than a week and I was thrilled when I picked it up. Seeing me, even Danilo, stern and businesslike at first, broke out in the kind of grin that comes from those who love and take pride in what they do.

Some Romans say bike use is just another one of the city’s passing trends. Not true, says Danilo. He agreed that Romans are fascinated by novelty and quick to try new things, but he doesn’t think the bike falls in this category. After all, he told me, “the bicycle isn’t really ‘new.'”

Even as the global recession cut into city and national purchases, Danilo’s sales have remained steady. In 2008 he sold more than 800 bikes, a record number for him (if that seems low, remember that this is Italy, where family businesses are opened only five days a week, closed for most major holidays and for two weeks during the summer).

Cars aren’t going away. But bikes are back.

Other bike rental outlets in Rome include:

About the Author: Brette A. Jackson

Brette graduated from NYU with a degree in Art History. After a stint in the art world, she attended Peter Kump's "New York Cooking School" (now "The Institute of Culinary Education"). She later worked at several restaurants and catering kitchens in New York City, and as an assistant freelance food-stylist and recipe developer for culinary publications such as "Martha Stewart Living" and "Food and Wine." Succumbing to her wanderlust, she and her husband moved to France where she accepted a job running the kitchen for the La Napoule Art Foundation in Mandelieu-La Napoule. While in Italy, she apprenticed at Florence's Cibrèo and Modena's Hosteria Giusti. She and her husband are currently living in Rome.