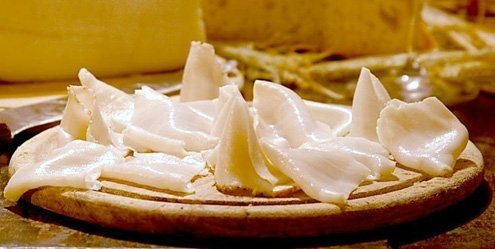 Lardo is light, creamy, aromatic, a sort of better butter that melts in your mouth.
T

hey were a middle-aged couple, in their early fifties maybe. They couldn’t speak Italian, but that hadn’t deterred them from winding their way all the way up here to a restaurant outside Massa Carrara (Tuscany) rarely found by anyone who can’t truck in the local lingo.

My wife and I were surreptitiously arguing about where they were from (she was betting Sweden, I was leaning towards New York, empty nest and a healthy pension fund), when their discussion of the antipasti on the menu caught our attention.

“What’s that one? Can you read that?” asked the woman.

“Umm… Let’s see… Salumi is salami. That one’s in… salter. Insalater. I think that’s a salad,” he volunteered.

“What about this one?”

“Wait,” said the man, turning over the menu. “There’s an English translation here on the back. It says, ‘Our special lard from Colonnata stored in a blend of peppers, rosemary, cinnamon and garlics.’ It is lard!

The lady made a face. “That’s disGUSting!” she exclaimed.

Let me interject here (much to my wife’s dismay): The woman’s right. For the uninitiated, eating forearm-length strips of pure white pig fat sounds like a thoroughly unappealing way to start a fine Italian meal, sort of like eating the buffet at International House of Pancakes before running the Boston marathon. But the problem with the uninitiated is that they don’t know what they’re missing. And when it comes to lard, what they’re missing is a lot.

For Americans, the word “lard” conjures up 1950’s breakfasts and sky blue cans of a greasy white frying paste known as Crisco. Final vowel aside, nothing could be further from Crisco than lardo.

It took me almost two years in Italy before I would try my first lard. My wife encouraged me to give it a chance, but the name and its pallid, vaguely oily surface totally turned me off. There were so many other delicious salumi on the menu, I reasoned, why waste my appetite on pig fat?

When I finally decided to give it a try, I discovered just how wrong I’d been. Good lard is nothing like fat… Well, at least it’s a finer form of fat. It is light, creamy, aromatic, a sort of better butter that melts in your mouth with none of the greasy, slimy feel I’ve always associated with animal fats.

There are two places in the Bel paese where high quality lard is cut, spiced and cured to delicacy status, and both can be found in the mountains. In Tuscany, they take the fat from slaughtered pigs’ backs and cure it in enormous white marble vats with a blend of salt and spices to produce Lardo di Colonnata. In Val d’Aosta, they do the same thing, minus the marble and plus a few alpine additions like juniper and white wine.

After six months or so, the final result is a savory slab that’s sliced razor thin and usually served either over warm toasted bread (Tuscany) or with breadsticks and honeyed chestnuts (Val d’Aosta).

The cut is key to enjoying lard. Slices should be as thin as possible without actually falling apart. This means that the lard will turn translucent and melt on hot bread, or in your mouth after being wrapped around a breadstick.

The taste is a little like salty, herbed butter, but often with a smoky aftertaste that makes eating it all the more enjoyable. Of course, it’s not a food for the easily queasy. The fact that its production developed in two distinctly mountainous areas is an indication of what the meat was originally intended for: high octane for the heart, a sort of primeval power bar that enabled people to restore energy they’d dispersed running up and down rocky slopes all day.

One note: if you happen to travel to where good lard is made, make sure you enjoy it in situ. If you absolutely have to buy some to take home with you, get the smallest vacuum-sealed package you can find, and eat it all in one sitting once you’ve opened it. In Colonnata they’ll tell you it’s the air, in Aosta they’ll say it’s the altitude, but either way one thing is for sure: good lardo hates to travel and doesn’t keep. Its mysterious, delicate flavors start deteriorating as soon as it leaves its birthplace, leaving you with little more than greasy fatback with a fancy name.