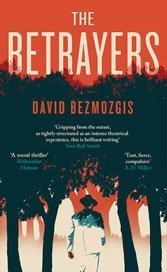 Baruch Kotler — born Boris Solomonovich in Moscow — is a one-time Soviet refusenik turned respected Zionist Israeli politician. Framed by a fellow Jew (and KGB informant), Kotler endured 13 years in a Soviet gulag before eventually come to roost and flourish in his promised land, wife, son and daughter at his side. He is in his mid-60s and widely admired.

But all this hard-earned prosperity is suddenly fraying. Opposed to an Israeli government move to dismantle Gaza settlements, the notoriously contrarian Kotler (a near-double for real refuseknik Natan Sharansky), is told to change his position or face sexual blackmail. He predictably refuses and compromising photos of him with aide and young mistress Leora are leaked to the media. Kotler and Leora bolt to Yalta, where Bezmozgis begins his story.

And a fine one it is. Storm-tossed into pre-annexation Crimea, Kotler is unexpectedly “reunited” with Vladimir (or Volodya) Tankilevich, his Cold War-era betrayer, the man who denounced him to Soviet authorities but who is now “a seventy-year-old man afflicted with cataracts, arrhythmia, and sciatica, captive of the trolleybus, tormented body and soul,” a decaying man in a decrepit place surviving only on a local subsidy he receives from a vindictive Jewish official as part of what might be called a penance. The betrayals here are many and subtle. There is Kotler’s betrayal of his wife and family, Volodya’s ancient KGB whistle blowing and the motives behind it, and finally Kotler’s son’s unwillingness — he’s a soldier — to follow orders and participate in the dismantling of the settlements.

Bezmozgis’ taunt prose gives theses contradictory forces a theatrical pace. Human frailty is uncomfortably mingled with the absolute nobility of Jewish priorities, a moral dimension that the “sinner” Kotler, once “the world’s most illustrious refusenik,” must now reckon with. If Volodya, to Kotler, is an “an ordinary man who was ensnared in a villainous system,” why can’t he be forgiven? And if he is, who, or what, forgives Kotler, who believes he needs no such license?

Just as Graham Greene and Brian Moore once test-drove their Catholicism in novels about cynicism, integrity, and the temptations of decadence, so the Riga-born Bezmozgis — whose family moved from Latvia to Canada — applies similar concerns to a different religious framework. The result is a thoughtful, often breathless thriller.

Bezmozgis also takes a smart swipe at American Jews, “cushioned from history and entrusted with too much,” and occasionally makes even Tankilevich into an anti-hero, since he more than Kotler recognizes the existence of a “deceitful, grasping world where everyone is suspect.” Finding relief in right and wrong is not assured.