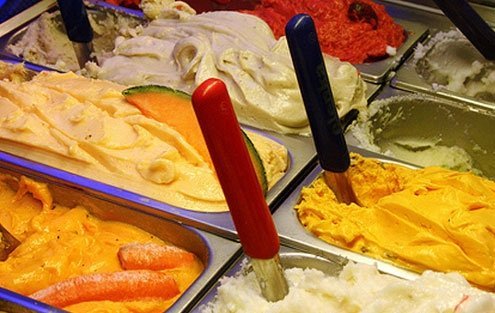 o one knows the true origin of gelato. Some say it began as snow mixed with honey and fruit nectar. In Asia Minor, ancient Egyptians and Romans transported snow from nearby mountains in special containers and used it to chill fruit extracts.

Gelato as we know it today was the 1686 brainchild of Francesco Procopio dei Coltelli. At the time, he never dreamed he’d created a culinary miracle that would transform the way many people eat.

Procopio, the story goes, perfected a device that his Sicilian fisherman father had invented. Weary of the fishing life, the younger Procopio repeatedly tested out his father’s machine and finally left to seek fame and fortune in Paris.

Using sugar instead of honey and salt mixed with ice (which delays the melting process), he introduced a gelato similar to today’s variety. Procopio opened the Café Procope, which soon became a Parisian staple and among the most famous literary cafes in Europe. King Louis XIV gave him an exclusive license to produce sweets.

Although no one knows just how accurate these facts are, there’s no doubting that gelato has Italian roots, so much so that stores in other countries make it a point to advertise “Italian gelato.”

A few years ago, while walking in Naples, Florida with my father-in-law, he was proud to show me a shop that advertised “Real Italian Gelato.” Inside were three handsome, Italian-looking guys, so I took a chance: I spoke to them in Italian. They looked a little stunned when I asked where they were from and how long they’d been in the United States. One of them finally confessed that they were actually Albanian, though all the locals thought they were Italian — including the young women who filed into the store.

Gelato is a compound in which fat-based solid components are machine mixed with hydrated air. The low temperature turns the locked in particles into a semi-solid foam.

There are two kinds of gelato: artisan and industrial. The artisan kind is characterized by the use of fresh ingredients, low fat and reduced air volume. The main ingredient is milk, followed by cream, sugar, and the flavoring component. You to have to eat gelato fresh and on-the-spot. Thanks to the Italy’s longstanding tradition, the country’s gelato industry covers 55 percent of the global market, a unique semi-monopoly. Fresh ingredients are a centerpiece of its success. The fruit flavors, or sherbet, are made of water, sugar and fruit. Industrial gelato is produced beforehand and stored frozen. Its ingredients include powdered milk, fruit juice concentrates, and additives such as colorants, emulsifiers, stabilizers and an assortment of flavoring.

In recent years a number of groups have introduced gelato franchises that produce a semi-industrial gelato. These chains basically piggyback on the success of artisan gelato and generally offer a lower quality final product. Rome is filled with such outlets, most located in strategic tourist spots. Near Rome’s Campo de’ Fiori tourists and students line up for colorful gelato sold by “Blue Ice,” a popular local chain. Unfortunately, color doesn’t equal quality.

When I was young, the differences hardly mattered. Industrial gelato was fine by me. I’d buy packaged ice cream that came with a mini-car as a bonus. The mini-car would “explode” after you set it going (it had caps inside), so I was sold on the gelato.

One day, coming back from a July vacation with my family, we stopped at a highway rest stop on the road to Palermo. In the restroom, gelato bar in hand, I decided to give the mini-car a test drive. It inched forward, leapt up, and popped. A short man with mustache leapt away from the urinal looking like death warmed over. “Son of a bitch,” he cursed at me in Sicilian dialect, “this time I was sure it was the end of the line.”

Soon after, a second guy came in, calmed him down, and the two of them left. I felt guilty over startling him, but I didn’t have the slightest idea what had happened. Later, seeing “The Godfather,” I guessed why my bathroom Sicilian wasn’t the kind of man who liked the sound of pistol-shot caps.

I’ll stay away from rating the best gelato in Rome. Taste is subjective. Most Romans choose gelato based on their favorite flavors. Instead, here’s a list of gelato stores where people take their work seriously, and you can count on fresh ingredients. Most Rome gelato stores are open daily. Check the websites for details.

If you want to make gelato but lack the appropriate equipment, try this this recipe for gelato di ricotta alla romana, which I often put on my Home Food menu. (Home Food is a Bologna-based project that encourages foreigners to taste traditional food by dining in selected Italian homes.) The result will impress your guests.

— Take the ricotta and press it through a strainer. Put the strained ricotta into a bowl and stir in the coffee.

— In another bowl, whip the egg yolks with sugar until they form a light cream. In a third bowl, mix rum, whipped cream, and powdered sugar. Gently combine the light cream with the ricotta-coffee mixture and then add the whipped cream mixture.

— Line a square pan that has a one liter capacity, with plastic wrap. Pour in the cream mixture, cover with plastic wrap and place it in the freezer for at least 3 hours. Cut this ricotta cheese gelato into slices and sprinkle with chopped pistachios.