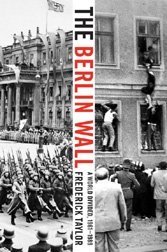 Taylor’s book is both comic and tragic: It is comic to read about East Germany’s paranoid and plain wacky world view and the Occupying Powers cat and mouse games. It is tragic to see how paranoia, wackiness and infantile-appearing games cost so much economically, politically, environmentally and personally. Former East Germany will probably never recover the industry and population and vigor that it lost when World War II finally — in 1989. The DDR experiment should be seen as last gasp National-Socialism dressed in Red.

Le Carré fans and serious historians alike will appreciate Taylor’s ability to recreate atmosphere from facts. Other Cold War children finally have a satisfactory account of what for their elders is vivid memory and for their juniors is now the ossified material of text books. The book explains the personal factors and the developing events that lead to the Wall’s fall, widely seen as impossible by both sides only weeks before its happening. Books such as this one only confirm the wonder that is public history; the strange combustible streams of private personality and public coincidence. When they mix and ignite, as they did in Berlin, the mixture shapes the political world, and the personal one.