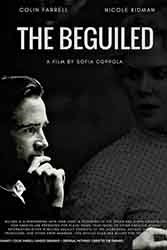 In Sophia Coppola’s latest film, a blend of the currently popular captivity and horror genres, Colin Farrell is a Union army mercenary recuperating in a Virginia boarding school inhabited by Southern women and girls waiting out the Civil War.

Farrell is the seductive Corporal John McBurney, a deserter who manipulates his way into each woman’s heart. Isolated and eager for social interaction, the two teachers, as well as the five girls, are vulnerable to his charms. This closed society provides the suffocating setting in which every relationship is fraught with sexual tension. As McBurney flaunts his masculinity by furiously hoeing weeds, Coppola elicits an Adam and Eve undercurrent. He’s the snake in the garden.

Yet there are hints of a feminist reading. It is the girls who choose to harbor McBurney. Miss Martha (Nicole Kidman) is in charge and governs sternly, keeping her own brimming sexuality in check. Even without the soldier, the women are united.

Coppola is always in control of her material; here, perhaps too much. Southern mists and trees heavy with moss remove the mansion from society. Confederate soldiers improbably pass by. All the fog and soft focus aren’t necessary to underscore the isolation and tense relationships. Nor is the camera’s repeated focus on the key to McBurney’s room.

Despite the contrived setting and set-up, “The Beguiled” has virtues, foremost among them splendid acting by the ensemble cast. Edwina (Kirsten Dunst) is portrayed as prim and plain, and her relationship with McBurney early on suggests his untrustworthiness. A subtle metaphor recurs in the act of sewing: first, with the young girls learning to keep their stitches straight; then, Miss Martha stitching up the corporal’s wounds; and finally a group sewing effort — they are all in this together. And, although she toys with it—an amateur amputation, crude surgical instruments, blood— Coppola thankfully does not yield to the explicitness that characterizes most horror films.

“The Beguiled” is a remake of a 1971 movie starring Clint Eastwood and Geraldine Page, with both films based on a 1960s novel. Coppola earned Best Director honors at this year’s Cannes Film Festival, widely acknowledged as weak. Hers is a worthwhile endeavor, not a great one.