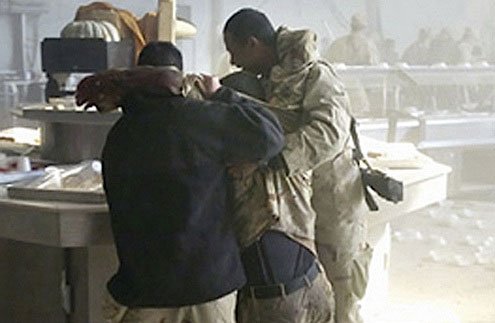 feel for The Baseball Kid. He’s distracted. I mean, like, here’s the question of the week and he’s going on about the Son of God.

It’s Christmas, I know — plus all those dead guys Iraq — but cut me a break.

The question was on the Newsday website: Something like, What do you think about the Los Angeles Dodgers pulling out of the Randy Johnson trade, the one that would have brought the Big Unit (they call him that) to the Yankees?

And if you’re The Baseball Kid, well, think about the possibilities. You could rag on the Dodgers or say, “Hey, chill,” Randy’s, like, what, 42? How many years does he really have left? Or you could say, ENOUGH WITH THE YANKEES! You could be slightly cruel; I mean it’s the Internet. You could say, “Spend the money on buying better armor for the troops,” or “Women troops rock.” (Even those that look like men and get killed anyway). Any way you look at it The Baseball Kid has options.

And it’s not like he hasn’t faced a question like this before. Just last week, when it came up about Kevin Brown and his no-trade clause and his, well, “attitude,” The Baseball Kid said, “These guys think they’re just so smart,” which struck me as a pretty good insight, as insights go. The Baseball Kid could have said, for instance, as some guy wrote yesterday, “Well, Brownie’s a decent pitcher who had a lousy year, and he also has a temper.”

No, The Baseball Kid is definitely distracted.

You can tell. It’s not like him, all the Son of God stuff, but I understand. I do a lot of reading. I do a lot of Googling. I check on things. I listen to how people talk. It’s the college in me. The thing I feel right now, if you ask me, is, “How do you understand it all?” I mean really absorb it, with everyone shouting all the time.

Take the elections, the ones in Iraq: You really want to tell me they’re having elections? Please. They’re blowing themselves to bits, us too. They want democracy? I don’t think so.

I guess in this way I can sort of understand The Baseball Kid. He could be, if you know what I mean, overloaded. And when you’re overloaded you look for one answer. One answer sounds really good, that it’s all pre-planned and you’re just going along for the ride, no hassle, kind of like, “Just following orders…”

I can understand that kind of thinking, but when I read about it in my searches, it seems like mass delusion, like running away from really thinking about things. And The Baseball Kid has always really thought about things.

Hey, this is the guy who called A-Rod “overrated” even before spring training this year and figured out Vasquez was probably hiding an injury when he got blown out all those times, and that the Dodgers probably figured it out. This is a guy who pays attention, who takes life seriously. This is a guy I listen to.

As for the God thing, again, there’s a lot of it around. Believe me.

It’s true; I wouldn’t have pegged The Baseball Kid as hardcore Christian. But you never know, and so what if he is? He’s got his set of answers. Maybe, if someone asks him about elections in Iraq, he’ll just say (I can’t be sure): “God has a plan for all of us … ” or something like that. It’s not like he’s into the Second Coming. That, for me, is more mass delusion, but The Baseball Kid gets the benefit of my doubt.

And who knows, maybe the Big Unit is a Christian. Maybe he believes in everlasting life. Maybe it helps him stay loose in his 40s, no offense meant to The Baseball Kid. Maybe it helps give his life a sense of purpose, and who would want to give that up because then you end up asking yourself, “What now?”

No one wants to ask themself a question like that. I mean, it’s depressing.

I will say this: I don’t like it when The Baseball Kid misspells the word “their” — he’s always writing “thier.”

This could be just a keyboard thing, believe me, “keyboard dyslexia,” is what they call it. But you figure when you’re talking about The Unit or the Son of God you’d better spell “thier” and “their” correctly or else risk getting the major parties mad at you, if you know what I mean.

Oh yes, and I also want to disagree with the guy who wrote in the other day about education (first education, then God; it’s stupid): he said we’re going downhill, that we’ve lost track of history and geography and morality, and that when John Elway went to Baghdad he didn’t even know the country once had a king, and a parliament, and a constitution. He just shook a lot of hands, like Rumsfeld, and left. I don’t know Elway. He did go to Stanford. He must be smart. But he got out of there in a hurry, like Rumsfeld; yeah, they’re smart. I’d get out too.

The thing is, though, as I said before, it gets confusing. I watch Fox sometimes, and CNN. I listen to WGN. But go figure what it means, why it’s our job to be the police. As if we’ll fix Iraq. Please. The Baseball Kid says it’s a mission, God’s; we’re willed to fix it in His image.

I don’t know about that. The Yankees might have been willed to get The Unit, but hey, the Dodgers welshed, or maybe Vasquez did, and look at things now. I’ve always hated master plans, like my father. He says that’s how you get overloaded. That’s how you turn it over to God. It gets to be too much, all these languages and faces and people you don’t know from Adam, all the hate and the violence, so you figure there’s got a be a plan. You stop listening and learning and find a master plan. Easy. You buy into it. That way you feel less dumb and guilty. You start talking to walls and think they’re listening. That’s what my Dad says.

If The Baseball Kid thought about it carefully I’m pretty sure he’d agree. As I said, I can live with the hardcore Christian part, but sooner or later, and I’m serious here, we need to talk baseball.