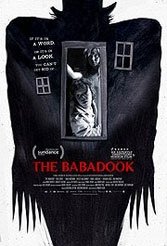 Amelia (Essie Smith) is a young widowed mother who lives with her volatile and highly imaginative six-year-old son Sam (Noah Wiseman) in a house that Sam’s first utterance immediately curses: “Mom,” he says, “I had that dream again.” That dream, alas, involves a nefarious Dr. Seuss-like character named Mister Babadook, who despite his apparent pop-up picture book confines is the opposite of all things cuddly and benign.

Australian writer-director Jennifer Kent begins by pushing her horror thriller in Sam’s direction — he’s the wild-child boy who wants to become a magician; a Dennis the Menace with a scary streak. Slowly, though, it creeps and snarls its way toward increasingly unhinged Amelia, a geriatric ward orderly whose husband was killed in a car crash as he drove her to the hospital for Sam’s birth. The mother-son bond is deepened and made sinister by a joint fascination with bogeyman Mister Babadook.

Kent uses old school tricks to play on paranoia, hallucination, claustrophobia, possession, and exorcism, to lesser and greater effect. But the ace up her sleeve is sleeplessness. Or sleep deprivation. Is there a real monster — and there would seem to be — or is Amelia a deeply distraught mother on the verge of an exhaustion-driven nervous breakdown that borrows from Sam’s hallucinations? Are ghouls the physical manifestations of psychological trauma, like a horse tugged to water and tortured until it drinks? This is a haunted house movie from a distinctly female perspective. Set aside its monster mash chills and it begs the question just how far you can push a single mom before she buys into her son’s needy illusions, or delves into children’s book dread to fill the void left by her dead husband. Fear, after all, is a self-inflicted wound, with the deepest anxiety not found in books.

Both Amelia and Sam are both fine screamers, which helps. So does a kicker that involves the basement feedings and leaves no one breathing easily.