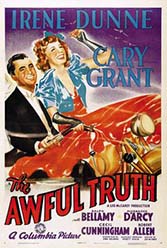 What matters most in director Leo McCarey’s delightful screwball-inclined romantic comedy goes by one name only: Cary Grant. Until this film, he’d been in the wings but yet to happen, at least not in star-spangled Hollywood fashion. Here, invited center stage to show off wit, charm, and comic timing, he confidently enters the stratosphere.

There’s nothing to the plot, which in fact is hardly wacky. Grant is Jerry Warriner, whose marriage to Lucy (Broadway staple Irene Dunne) is suddenly on the rocks after she comes home late with a dapper Frenchman, and he takes offence — after returning from a trip to Florida that actually took him to California. Divorce was still something of novelty item in the 1930s, and as such a delicious way to thrash out wheat from chaff when it came to cinematic true love.

Hubby and wife argue over who’ll get custody of their beloved terrier, Mr. Smith (wire terrier “Skippy” was a 1930s staple), after which Lucy dates an oil man from Oklahoma (Ralph Bellamy) and Jerry steps out with an heiress. As soon as Lucy realizes she’s still in love, the fun and games begin big-time, and the irrepressible Grant keeps things moving thanks to good-natured sarcasm and overall silliness. Mothers and aunts burrow into the mix, judging and meddling, while Lucy schemes to turn the table on the man she suddenly misses.

Grant, 32 at the time, and Dunne are genuinely amiable as an upscale Manhattan couple that break up as comically as they make up. Again, though, the name of the game is Grant, one that would become a staple in all genres for decades to come.