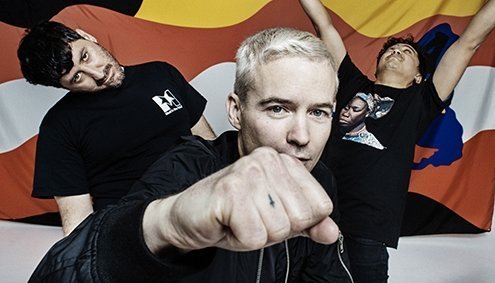 he best description I’ve ever read of The Avalanches’ 2000 debut Since I Left You calls it a record “of the future built of the past.” There’s a good argument to be had about the Australian group’s vast, all-encompassing electronic collage funneling the music that came before it into a wildly vibrant portend of what the decade that followed would hold.

In its 18 songs, you can find old school hip-hop, Romantic-period piano pieces, and Tropicália. The roots of the soul and funk revival appear, along with nods to indie-rock heavy-hitters such as The Arcade Fire, Caribou and Animal Collective. There’s even a trace of Balearic house and chillwave. The record also includes MTV2 favorite “Frontier Psychologist,” a bona fide indie hit in its time.

The allure of The Avalanches wasn’t just in the impressive breadth and compositional finesse of Since I Left You, but also in how little was known about what they were doing.

I have faint memories of a rumored Avalanches follow-up from as early as 2002. Every couple of years since, there’s been a phony news report or some message board hopeful stirring up the pot. Naturally, nothing ever came of the rumors.

Until now. Here, in 2016, where all things are possible and anything old that could possibly be made new again is, The Avalanches have returned to reinvent the future with Wildflower (Modular).

That it exists is no small miracle. Apparently, those rumors from ’02 weren’t misplaced — producers Robbie Chater and Tony Di Biasi had started making music immediately after Since I Left You‘s release — a mutated sort of a collaboration with Luke Steele from 2003 can be found on “Colours.”

But Chater was stricken with two auto-immune diseases in mid-decade and underwent treatment. Work stopped. In 2007, the group announced it had some 40 songs but no plans for an album. Collaborations with Ariel Pink, Camp Lo, MF Doom, Danny Brown, Toro y Moi, and others were absorbed and incorporated. The music was never in doubt but its end destination always was.

Given this difficult and convoluted backdrop, Wildflower stood no chance of being a groundbreaking work.

Relieved of the responsibility, however, it is a favorable document of feel-good, sample-based beat music.

The Honey Cone sample of “Because I’m Me” swerves to life and both Camp Lo members rap sparingly to pick up right where Since I Left You literally left off. Whereas its predecessor thrived almost entirely on sampling, the number of live instruments and guest vocalists on Wildflower is substantial.

Some are more successful than others. Doom and Danny Brown’s turn on “Frankie Sinatra” grates after a few listens and Biz Markie’s child-like verses on “The Noisy Eater” aren’t so much bad as awkward, playing a little too strongly on the album’s youthful energy and perspective. But Toro y Moi’s Chaz Bundick suits the breezy effortlessness of the Avalanches aesthetic perfectly and their union on “If I Was a Folkstar” is among the album’s many highlights. The appearance of A.Dd+’s Paris Pershun is also well integrated on “Live a Lifetime of Love.”

Nothing sounds especially dated in part because songs don’t stay in one place long enough to lapse into parody or linger in any one particular era. With no real breaks between songs, this is music that insists on complete immersion. Once you’re in, you’re not coming out until you’re at the other end of the 21 songs, clocking in just shy of an hour.

Through time and tribulation, The Avalanches have emerged on the other side with a record of the present built of the past, a past its members were instrumental in helping to construct. The frontiers of music may have been ransacked and deforested over the last 16 years, but that doesn’t mean there aren’t still idyllic patches of musical possibility. Wildflower stands, triumphantly, as one such example.