The Autobiography of Jane Doe 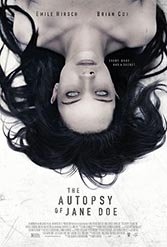 In Norwegian director André Øvredal’s inventively gruesome ditty, Brian Cox is widower Tommy Tilden, a rural Virginia coroner who works from his basement assisted by his apprentice son Austin (Emile Hirsch).”Down here,” says Tommy, “if you can’t touch it, see it, you don’t want to know it.” For him, the surreal is a whole lotta hokum.

Enter Jane Doe, a strangely pristine corpse discovered in the basement of a local couple that’s been brutally murdered. Tommy’s job (at night, of course) is to find COD. But what emerges from grey-eyed Jane, piece by piece, make Tommy and dutiful assistant Austin into the kinds of witnesses unlikely to live long enough to tell their tale. Put aside the countless horror tropes — old basement, thunderstorms raging above, hissing cats, sudden radio static — and writers Ian Goldberg and Richard Naining serve up a not-bad slice of “living dead” fare, with plenty of bewitching vibrations on the side. The proceedings are lubricated by constant close-ups of Jane Doe’s menacingly immaculate face, adding a strange and sexually charged ingredient to the literally tortured mix (Jane’s all-seeing corpse is that of actress Olwen Kelly).

The apocalyptic endgame is fairly hackneyed, but that’s the norm in slow-burning horror flicks (“We are way past possible,” quips Tommy as the avenging corpse begins making waves). Yet the bearded Cox is a sturdy actor and the creepy claustrophobia of at-home underground morgue a nice touch. Leave the rest to deadly restless Lady Jane.