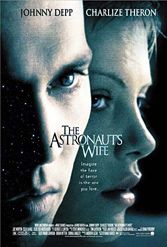 This stylishly strange and flawed sleeper can grow on you — or in you. Astronaut Spencer Armacost (Johnny Depp) returns from an orbital mission in which something awful but murky occurred. Extroverted lover-boy Armacost is somehow altered and wife Jillian (Charlize Theron) senses the change.

Sexually charged, Armacost is also immediately determined to make a baby. When Jillian becomes pregnant, Rand Ravich’s movie gradually veers toward monster mash silly. Before then, though, it’s a weird and oddly atmospheric take on “Rosemary’s Baby” with space as the Devil’s HQ. Depp (with a Texas drawl) and Theron are slightly and intentionally off key, which at times makes the movie deeply creepy.