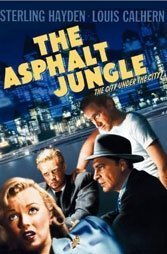 John Huston’s gritty heist-gone-wrong noir is a superb hitching together of character snapshots led by Sterling Hayden’s baleful turn as Dix Hayden, a Kentucky thug dead-ended in a postwar Midwest city riddled with what the local police commissioner calls “predatory beasts.” When canny jewel thief “Doc” Erwin Riedenschneider (a sly Sam Jaffe) gets out of jail after a seven-year term all he can think of is going through with a caper he never managed to pull off before his arrest. In cahoots with crooked big-time lawyer Alonzo D. Emmerich (Louis Calhern), Doc puts together a crew to rob a million in jewels from a local vault. But bumbling and bad lack turns the aftermath of the meticulously planned robbery into a frazzled mess, making all its leading players fair game for the police, a.k.a. “the happiness boys.”

If the first third of the story is planning, its latter stages are the seams coming apart. But Huston has all his people sussed. Good-hearted hooligan Dix wants above all else to go home to his idealized Kentucky, to “take a bath in the creek and get this city dirt off me.” German-born Doc is shrewd but locked out of the times around him: seeing a couple doing the jitterbug leaves him slack-jawed, and feeling old. “Big Fixer” Emmerich has a weak spot in his mistress Angela (cooing Marilyn Monroe). Hunchbacked fixer Gus (James Whitmore) is driven but too loyal for his own good. Each of Huston’s creations — including Dix’s cloying girlfriend Doll (Jean Hagen) — tells a story in their own right, and together convey a postwar patina of grit and folly that would later help make cop shows a staple of American television. From a novel by the same name by W. R. Burnett, author of “Little Caesar.”